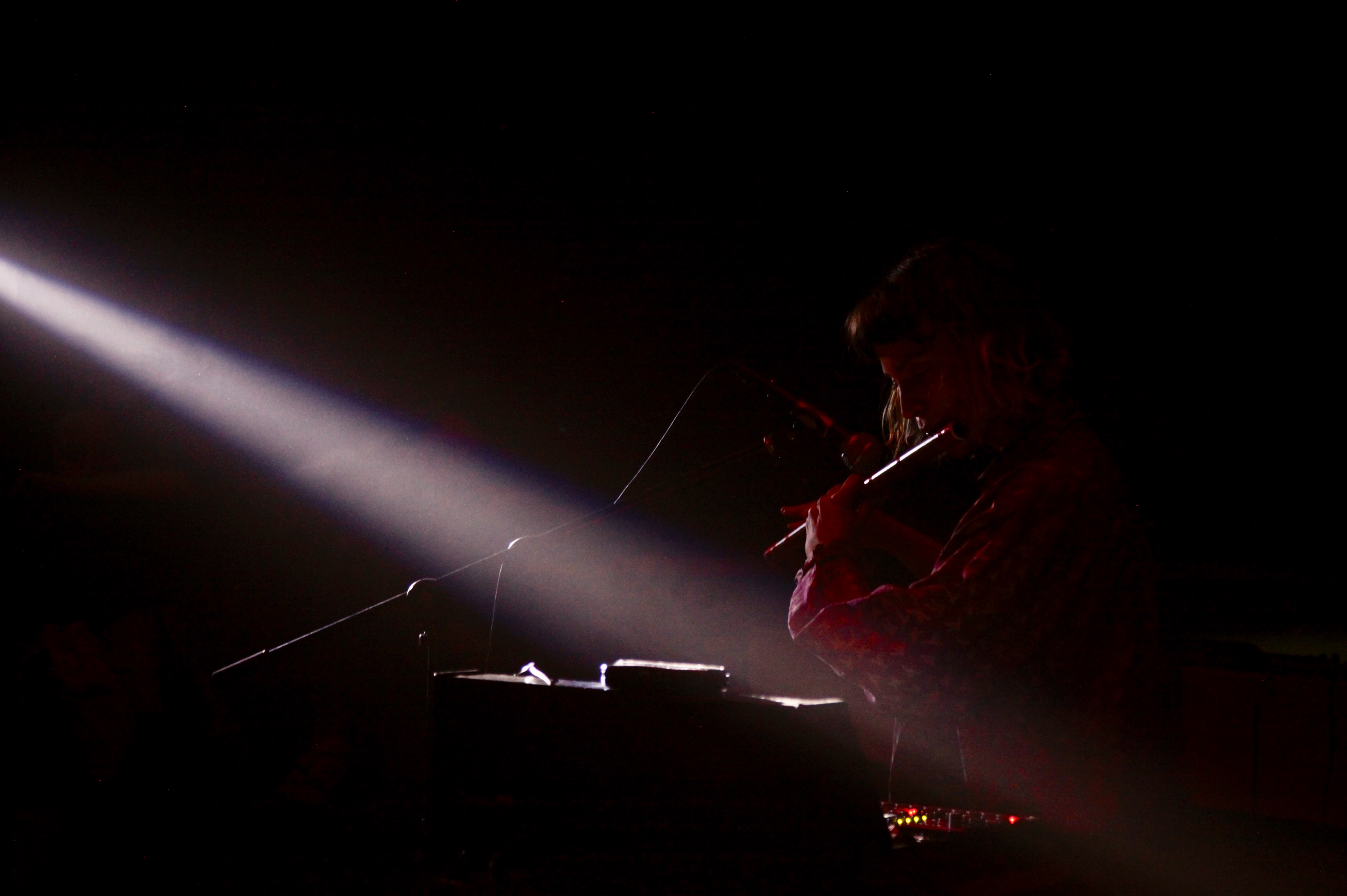 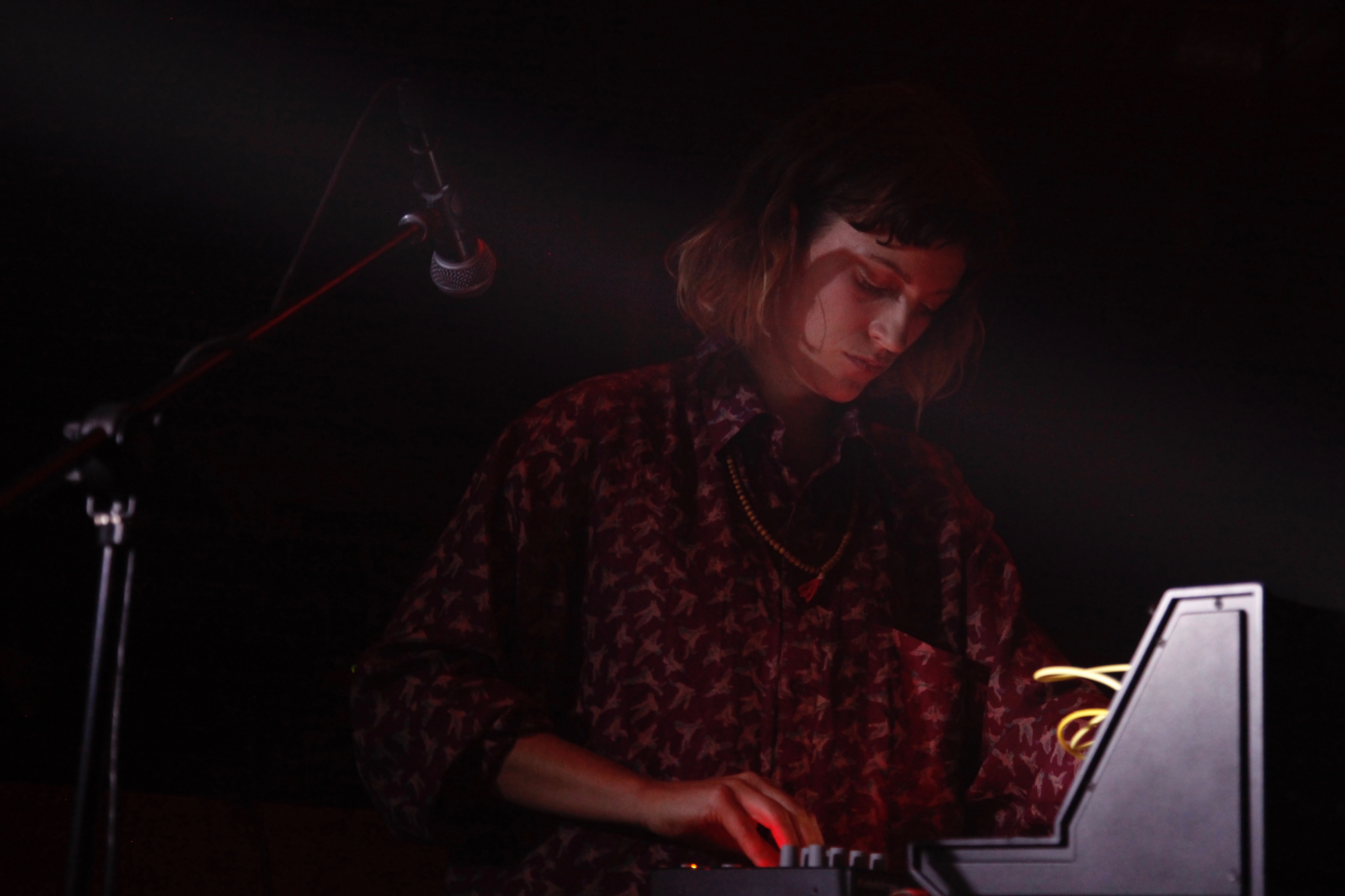 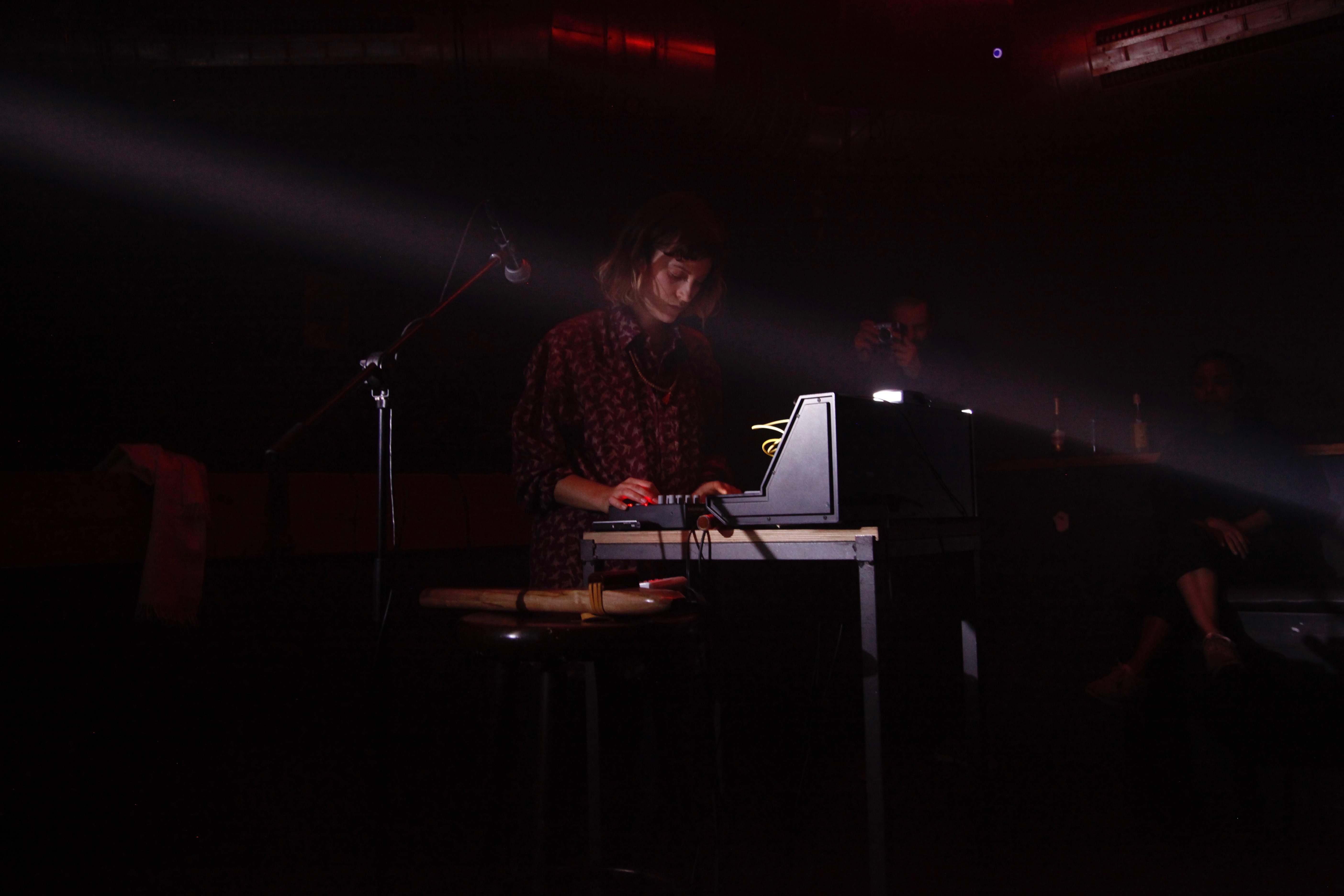 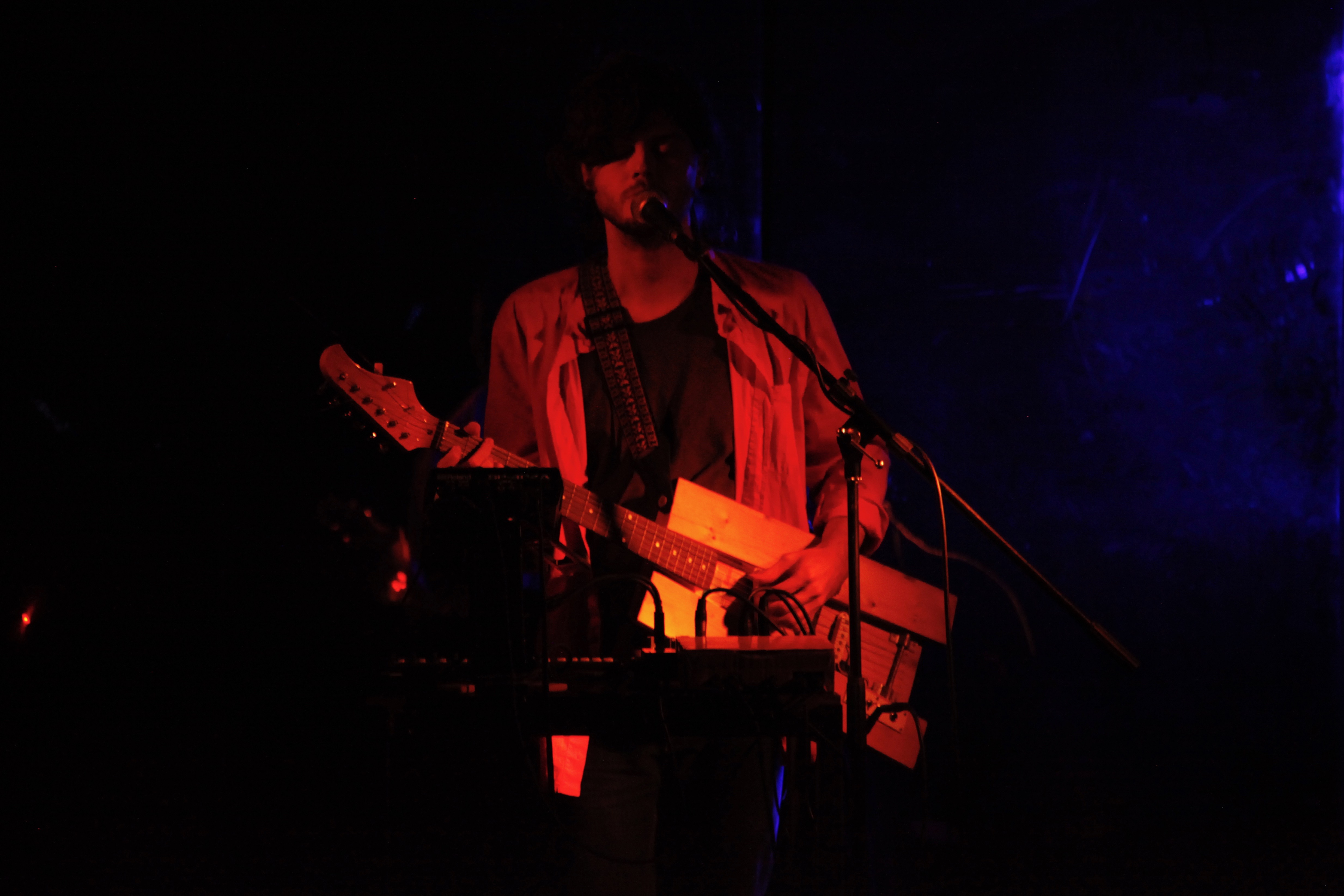 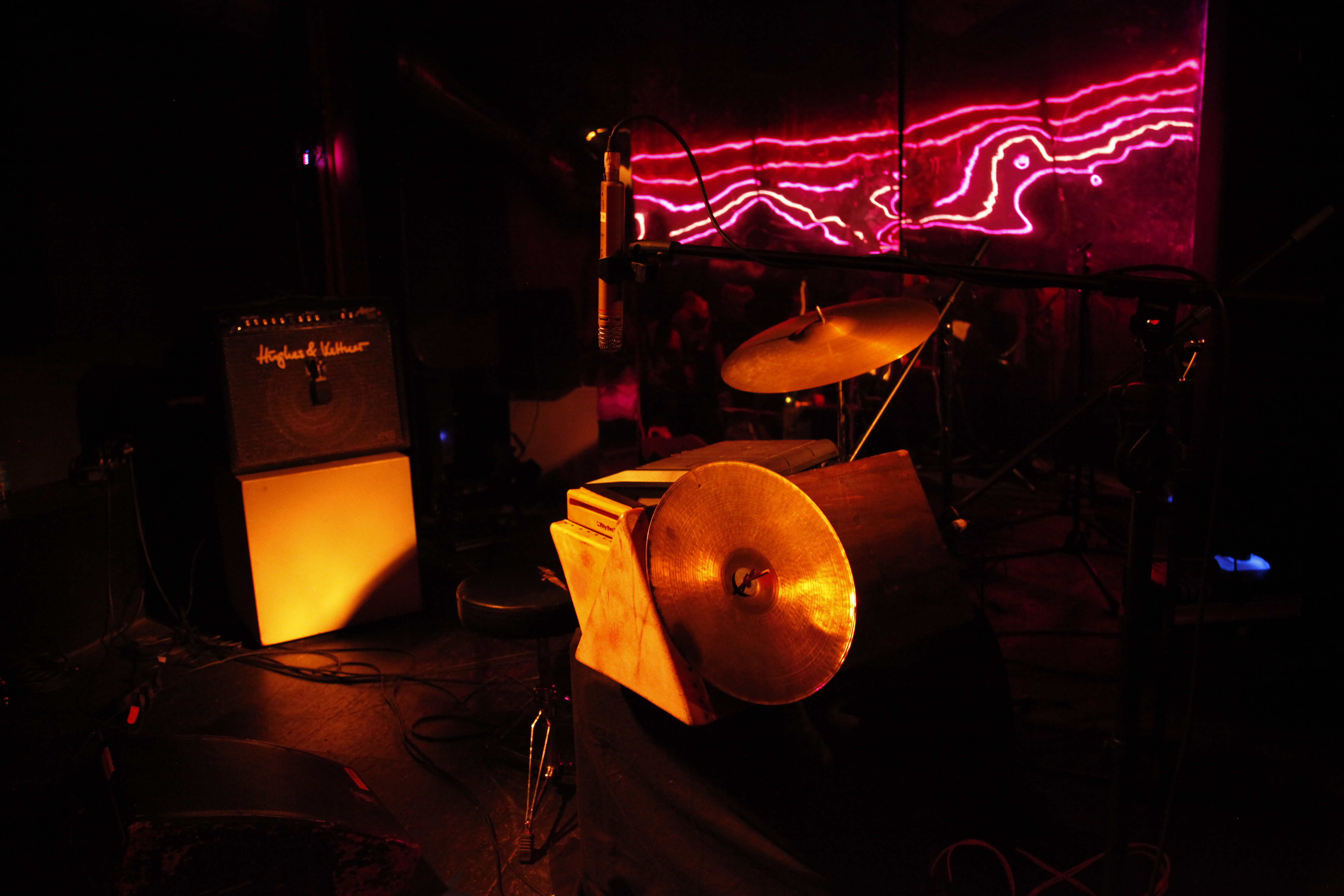 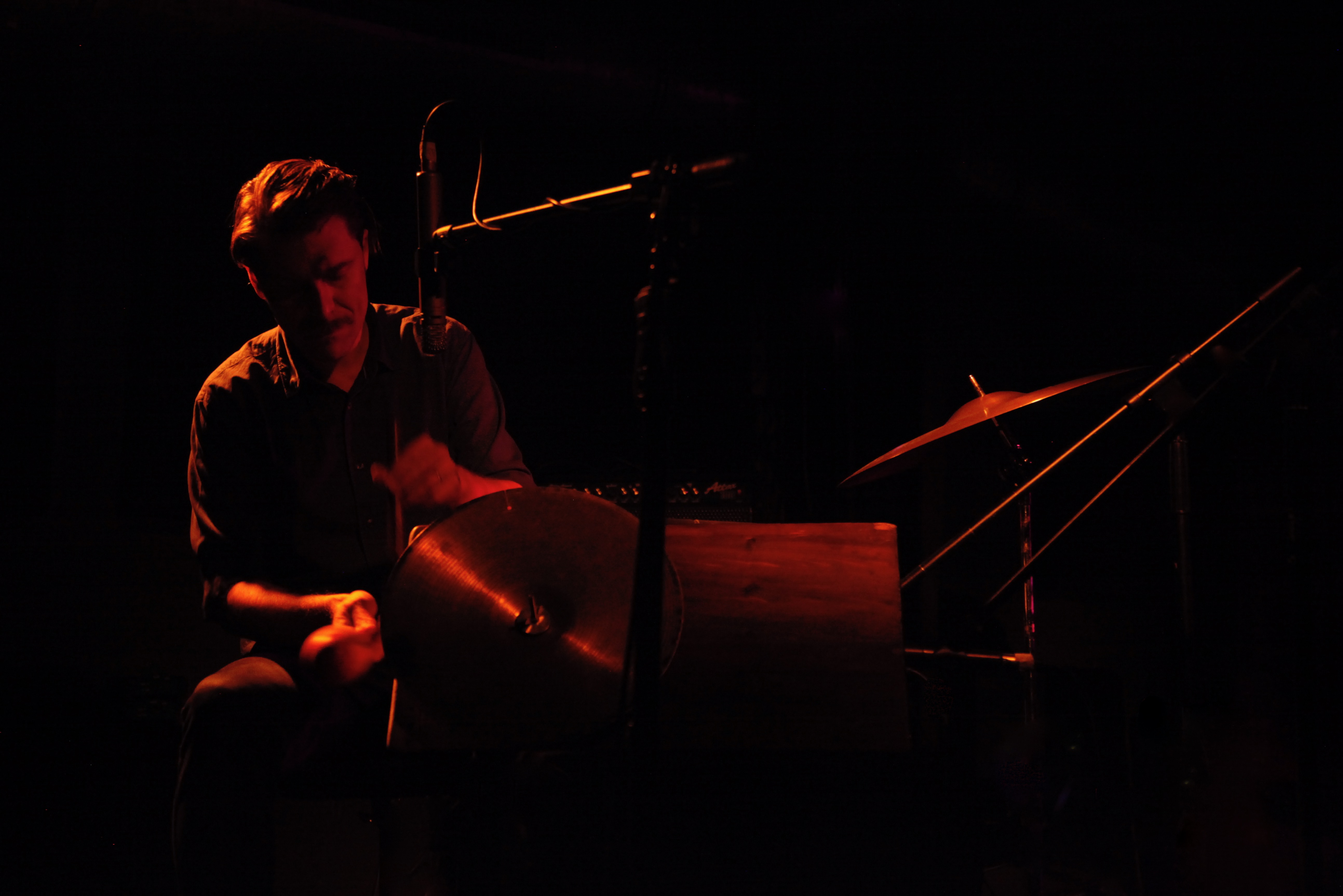 Here we have another edition of Amplify Berlin — this time the first mentees of Semester Three who have spent the month working with their mentor, Andrea Belfi.

Victor Negri (AKA Arubu Avua) works on projects encompassing sound art, songwriting, video and poetry, as well as soundtracks for film, performance and dance. His production often reflects on technology malfunction and misuse, the limits of language, as well as a vanguard-of-backwardness approach in order to affirm non-western worldviews and timelines. Including solo and collaborative works, he has performed in Brazil, Germany, Italy, Latvia, Lithuania, Estonia and Spain, with pieces exhibited at EMA, transmediale Vorspiel, ADAF, Mostra do Filme Livre, among others. He is currently studying at UdK Berlin. Arubu Avua is a musical project that approaches Brazilian songwriting through electronic experimentation and deconstruction.

Diane Barbé is a sound artist and recordist based in Berlin. She researches the way we relate to our acoustic environments, using sound as a gentle medium to understand, represent and expand perception. In her live sets and radio podcasts she mixes concrete sounds, acoustic instruments and minimalistic synthesis to achieve journeys much akin to lucid dreaming. Diane has released tapes wth Jungle Gym (USA), XYZ records (Czech Republic), and her ambient music is featured on the 2019 Nachtdigital Mint compilation (Germany). She is currently training as a field recordist for documentaries and studying music at the UdK Berlin.

They’ve asked each other a few questions to reveal some aspects of their creative practice and approaches to music making.

Diane Barbé: You started playing guitar in teenage bands in Brazil and told me going to university really changed your perspective on what music can be, what songs are. How was that journey for you? How do you relate to Brazilian musical culture now that you’ve lived abroad for some time?

Victor Negri: At that time I came in contact with many forms of expression, from Brazilian classics to experimental composers, that were not accessible to me in my hometown. It was all gradual, over the course of 5 years or so, but I remember at some point discovering a stutter effect VST plugin and started putting it on everything. This kind of studio-as-instrument approach helped me find ways to completely transform ideas that were stuck, and it didn’t matter if they became songs, almost songs, or not songs. I had been interested in effects and recording techniques since I can remember, maybe more than becoming a good musician technically. So somehow that started to come together then.
Being abroad, I’m more aware of the dialog I can only have with that culture, or whatever slice of it I can call my culture. I think that contributing somehow to that specific conversation, musically and otherwise, has always been my main motivation to make music, and that hasn’t changed, although it’s wonderful to be here learning so much from people from so many different places. Also, I recently started collaborating in a mixtape project called XABU, focused on Brazilian underground music.

DB: Does the equipment you use influence the kind of music you make? How do you manage to keep “one simple instrument”, like a guitar, interesting?

VN: Sometimes yes, it’s like a new language that allows you to say other things, which are untranslatable. But I must say sometimes I look at what I’ve done on many different types of equipment over the years and think it all sounds the same.

About the guitar itself, especially the acoustic, it’s always there, but it’s not necessarily the main character in the final piece. I wouldn’t say the guitar is a simple instrument at all, but I think my guitar playing is quite limited. So I guess I keep it interesting by putting lots of other non-guitar sounds around it. However, I’ve also realized that many of the samples I use, or synth sounds, sound a bit stringy. Or they’re actual guitar samples that I played. So, if we look at it that way, it would be as if I’m always exploring the combination of guitar and voice, even if it’s destroyed and remade or synthesized. Going all over the place, but in the end just being a singer-songwriter from the 21st century.

DB: What’s a book that has been really influential for you, spiritually or musically?

VN: I thought about a book by Kazuo Ohno whose title in Portuguese is Treino e(m) Poema, and google tells me the English title is Words of Workshop. It’s a selection of excerpts from Ohno’s lectures for butoh dancers, which he expresses in a beautiful and poetic way; to me it serves as a sort of guide not only to re-center myself, but also as an almost accidental record of spontaneous spoken poetry, which is different from writing poetic prose. It’s a more recent book for me, but it fulfills that spiritual and even musical role by helping to connect with the body and with intuition.

VN: I like the way you incorporate the flute into your sound textures. How was that process? Did you start by playing the flute and then later moved to more electronic territory? If so, was it a conscious choice to bring it along?

DB: I actually started using the flute again quite recently. I took a long break from acoustic instruments after studying the flute and the violin in classical conservatories in France when I was growing up. There was so much stiffness in this way of playing music, and I felt completely alienated from it. I really didn’t feel any grand emotion when I played in the orchestra, and it took me almost ten years to reconnect with music making. It all came back after doing a few field recording workshops in the south of France, with a really great collective called Phonurgia who invited the ornithologist Bernard Fort, who composes almost exclusively with birdsong. So there I was, in the middle of a wetland at dawn, listening to all these insects, frogs, birds and reeds all sounding together, and it brought me so much peace. Truly what Pauline Oliveros would call an “ear cleaning”. After that, I would play these recordings at home, and it felt simple and natural to improvise: the landscape was already there, and I was a part of it. So I use field recordings a lot –I sample them, slow them down, spatialise them, and it immediately helps create a space, a color, a season. When I travel, that’s what I bring back now, instead of photographs. Then I build a universe, a narrative, integrating electronic sounds and instruments like the flute and the harp into it. I try to transform all these sounds so we cannot identify them too easily, so it doesn’t sound too human and familiar, in a way. In fact, I recently switched to using a Bansuri bamboo flute because the timbre is a lot less formal to my ears and there’s a lot more you can do with pitch bending and gliding.

VN: How does your experience making radio shows affect the way you make music?

DB: I started doing shows on Berlin Community Radio three years ago, as a platform to play music from female and non-binary artists, from early electronic composers to Jamaican dub singers and post-punk bands. It was a really nice way to actually look into the lives and experiences of these musicians I love, to understand the context of these songs better and gain some perspective on the scene around me in Berlin. There is so much talent out there! These radio shows were a great way to meet people and share music with them. Mixing records is also really interesting because you have to listen to the music in a more analytical way, noticing how songs fit into each other rhythmically, or in pitch and timbre. It definitely inspired me to expand my sound palette, using for instance pure synthesis tones, that feel extra-terrestrial somehow, with very organic sounds like wood percussions and flute loops.

DB: What have you been listening to lately?

VN: A lot of jazz, actually. I went to a little market last weekend near my house and there was an old guy selling records. Alice Coltrane’s Ptah, the el Daoud on the forefront. So I went home with a salad and a few LPs, and I’ve been listening to that, Pharaoh Sanders, Dorothy Ashby, Don Cherry, Yoshio Suzuki a lot this summer. I’m also going back to some old favorites, like Roberto Musci’s Loa of Music, or Midori Takada’s Through the Looking Glass.

Diane Barbé
Back to Top