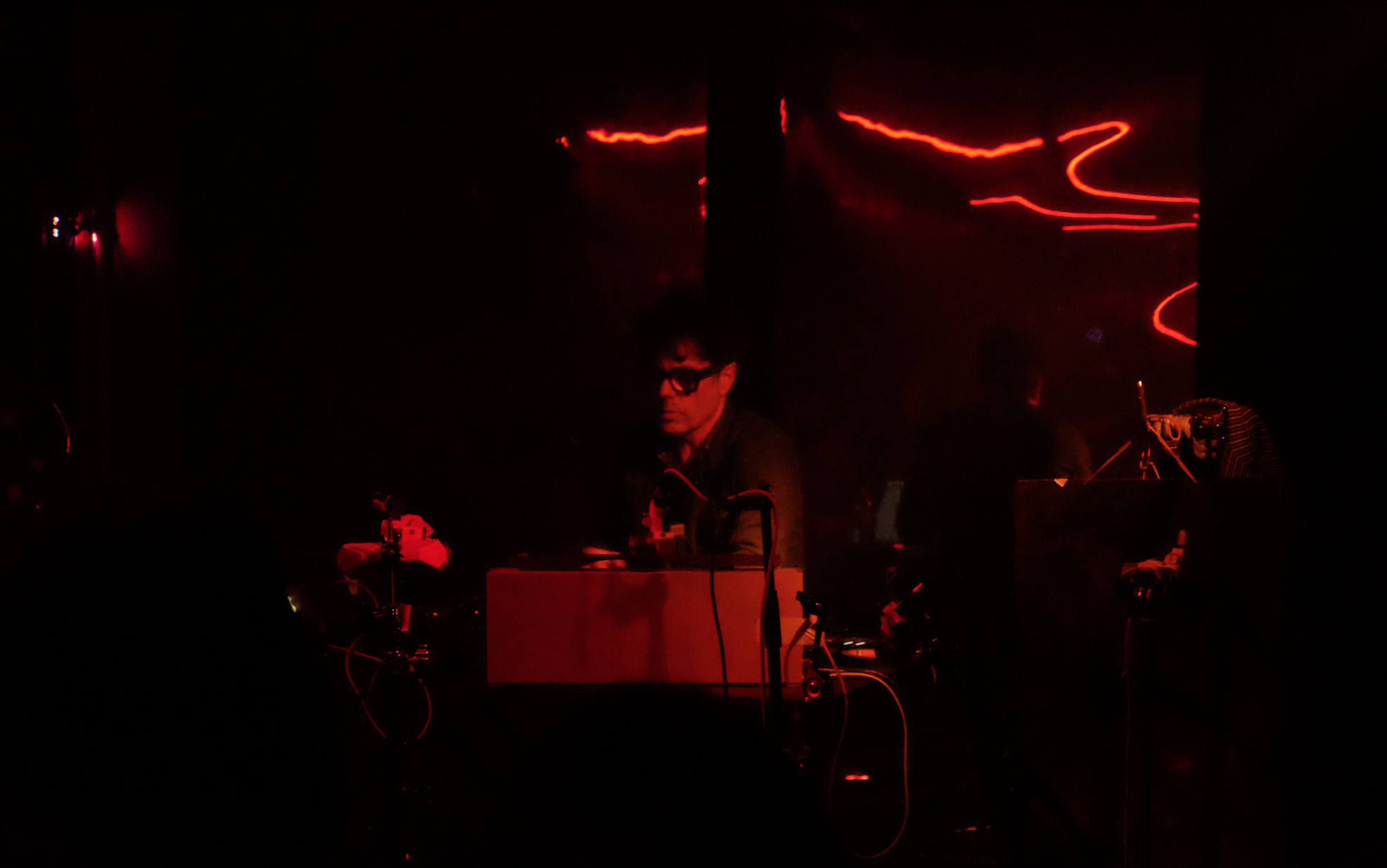 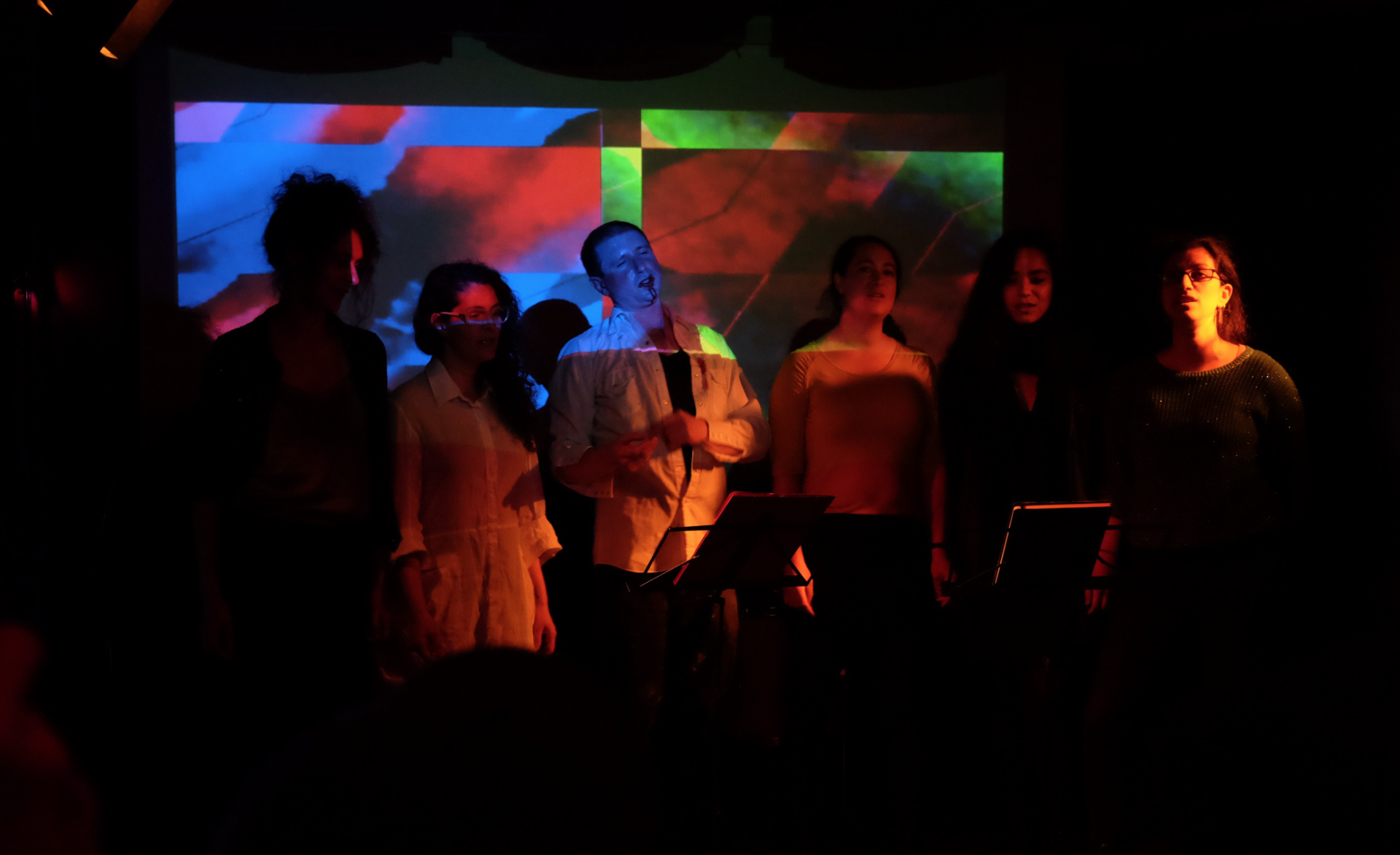 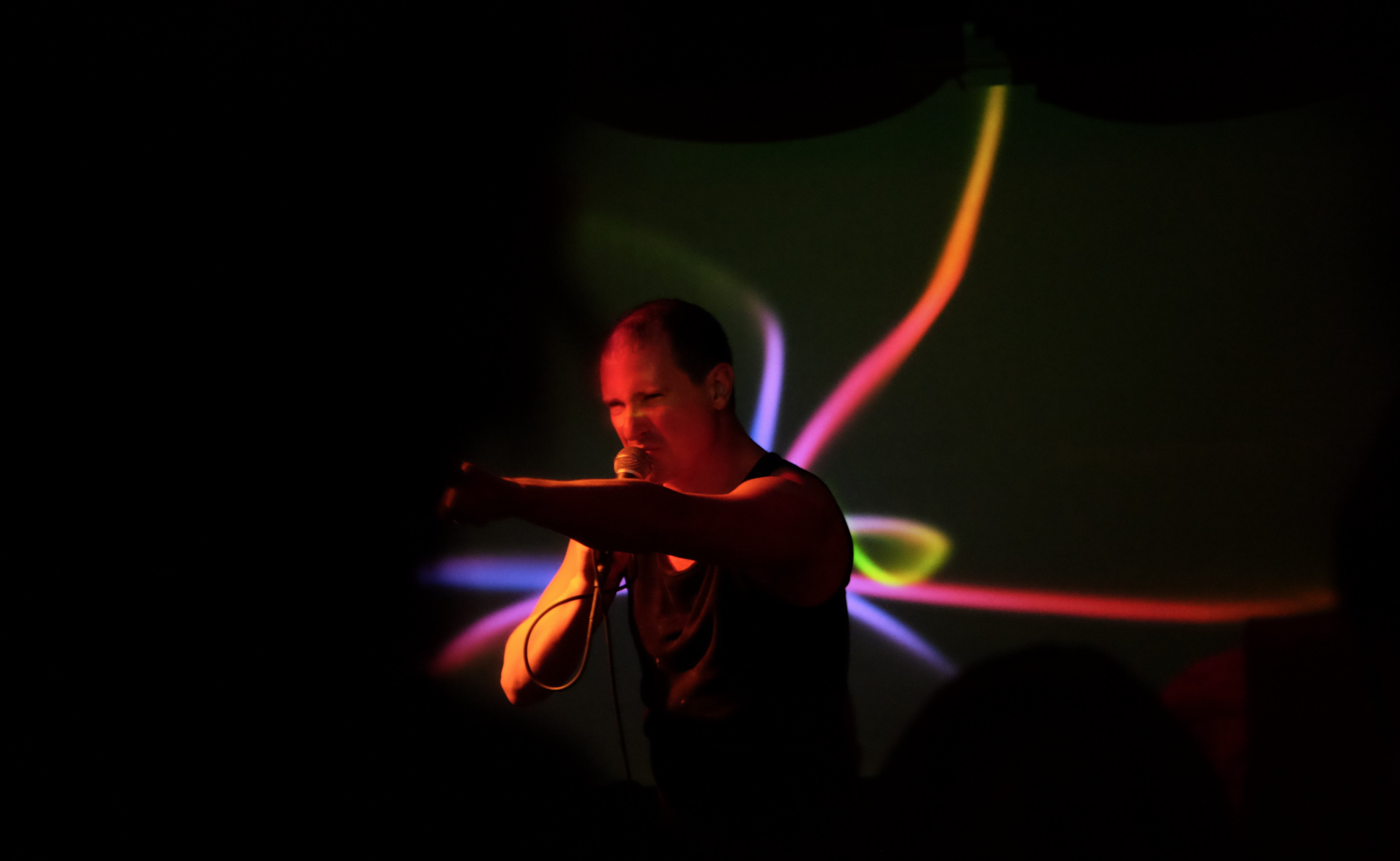 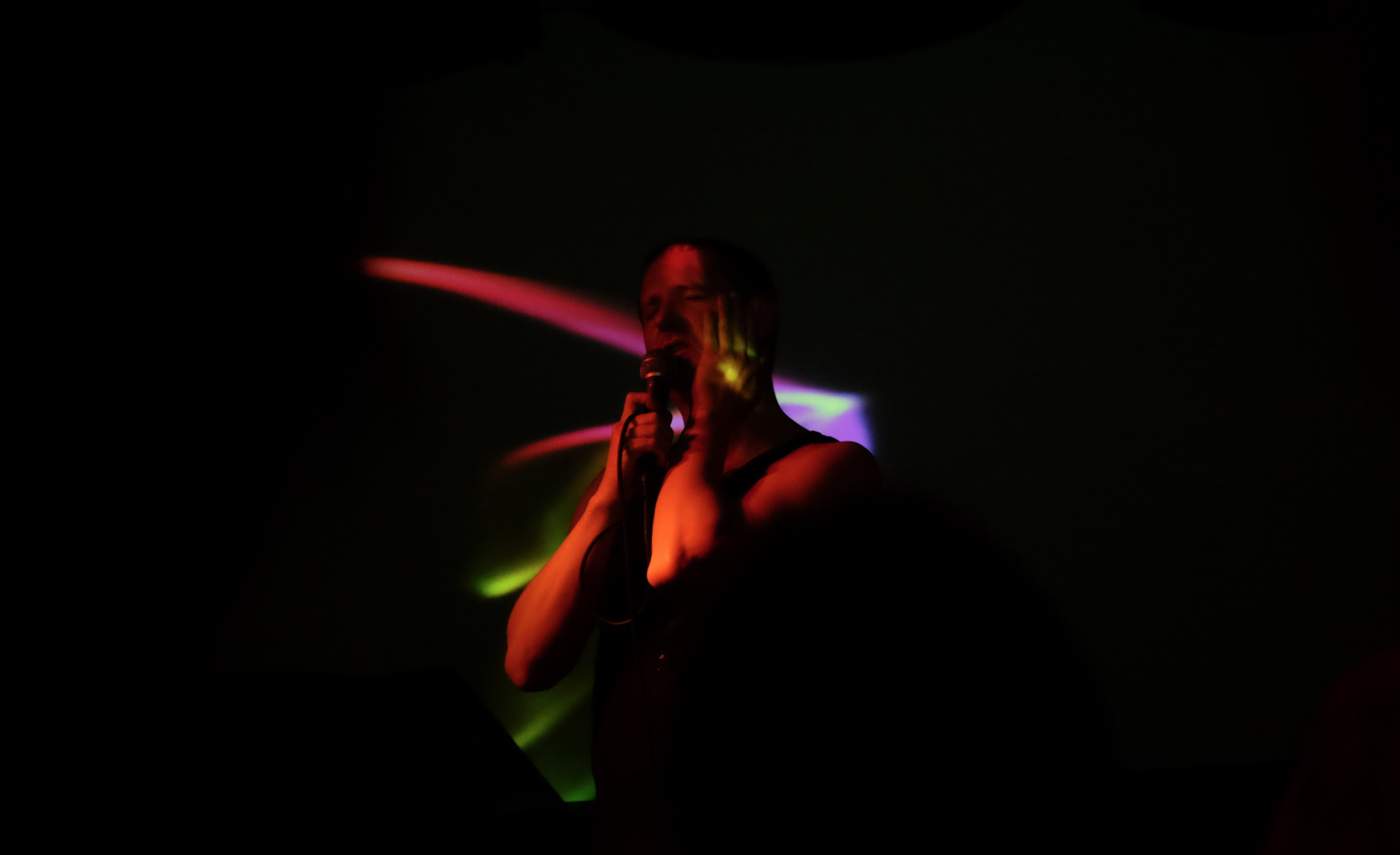 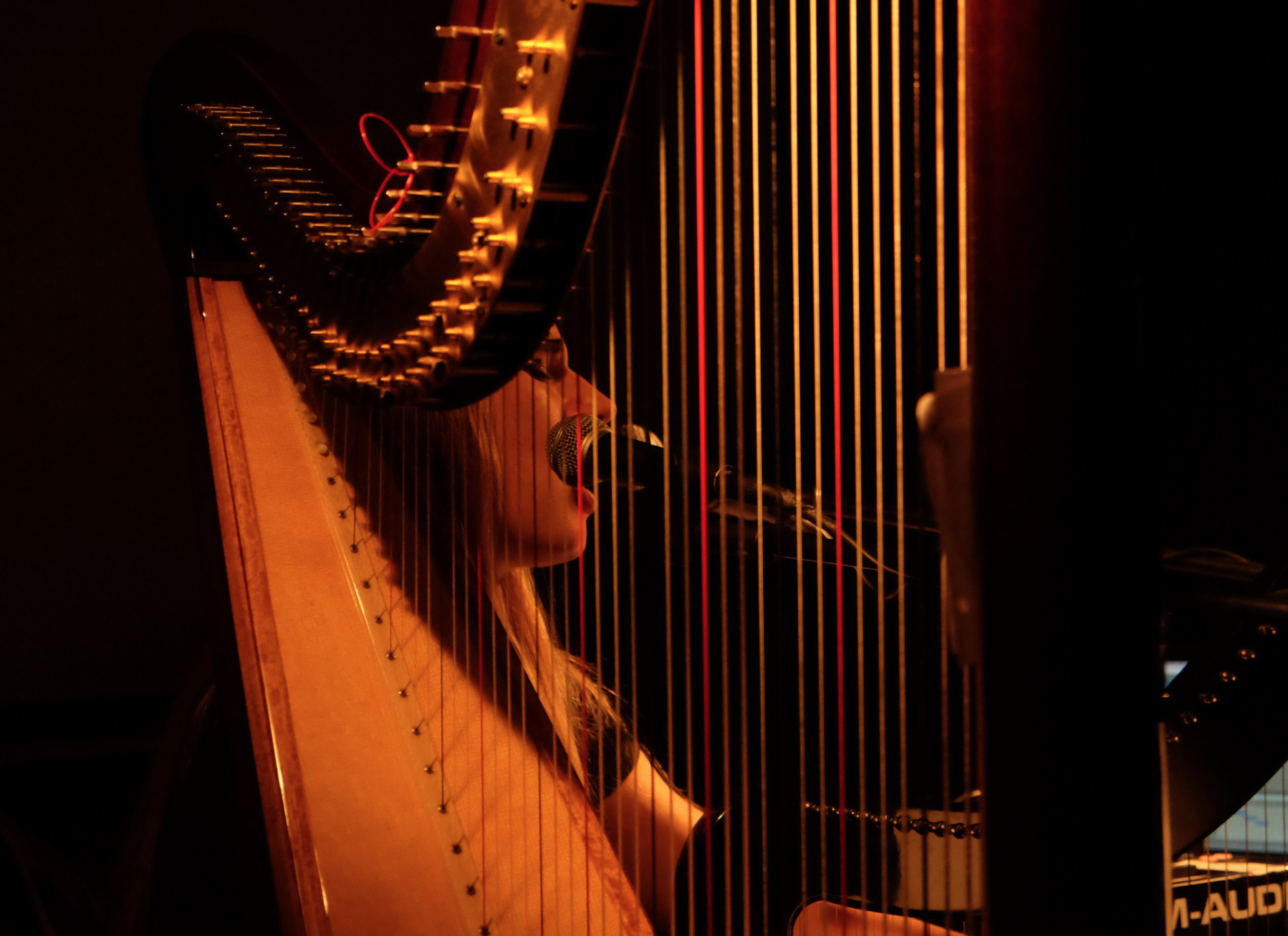 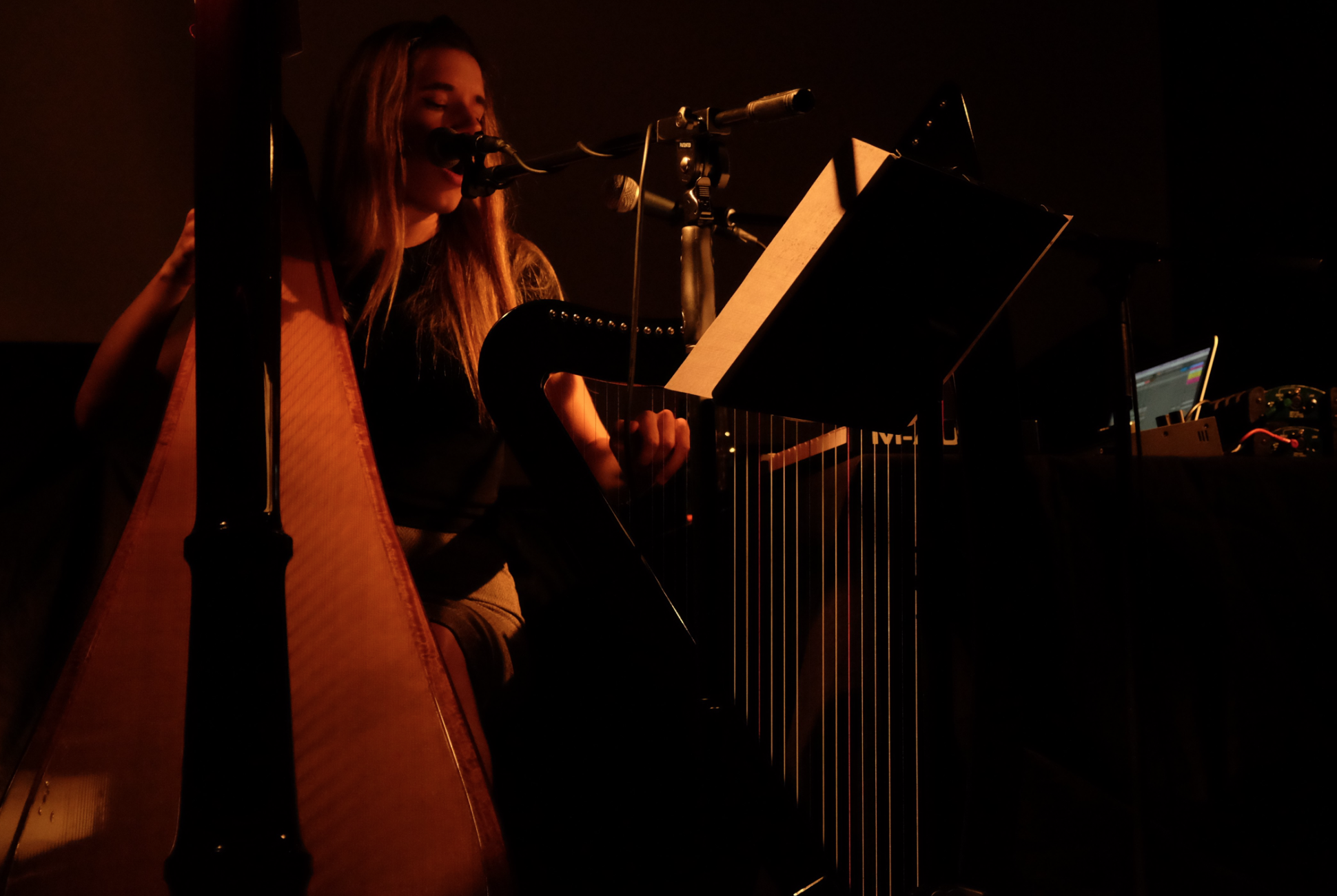 The mentees have interviewed each other revealing more about their practice, their inspirations and some personal reflections on lies, luxury and loneliness.

Aaron Snyder AKA Big Daddy Mugglestone is a Berlin-based musician, producer and performer. Born in Denver, Colorado, Mugglestone started playing the drums and recording on his 4-track at the tender age of 12. An interest in world music and marginalized cultures led him to study Ethnomusicology at Indiana University. In 2004, Mugglestone founded VALIS Records to publish and promote his music and musings. Since moving to Berlin, he has been involved in many different projects involving the interplay between machines, the human brain and contextualized space—but he still likes to sings those sad old songs and give strangers unsolicited fashion advice.

Athenian harpist Sissi Makropoulou AKA Sissi Rada celebrates music in a multi-faceted, but still very personal way. Living and working in Berlin, she collaborates with orchestras such as the Berliner Philharmoniker, the Deutsche Oper and MusicAeterna. As a solo harpist she has won numerous prizes (2007 5th Dutch Harp competition; 2010 Young Soloists competition in Athens). As a composer, she is especially active in the world of Dance Theater. Under the pseudonym Sissi Rada, she is active in the electronic scene as a singer, producer, lyricist and writer of various blogs and magazines. She has collaborated with David August, Deerhoof, Lena Platonos, Kadebostany and performed in festivals auch as the Berliner Festspiele, Electronic Beats Festival, Xjazz and Reeperbahn.

Big Daddy Mugglestone: When was the first time you successfully lied to someone and how did it make you feel?

Sissi Rada: It’s funny that you take as an axiom that I must have already lied! I swear I am telling you the truth: I did it for the first time very recently and I hated it. It felt degrading to myself—and I mean it totally selfishly and not at all in a constipated-moral way. I always admired this Larry David type on the dinner table, saying those things that makes everyone uncomfortable. Larry David is a great figure. He never lies. However, this deprives him of all the great privileges that lying has. Let’s admit it: the invention of lying is a great one. No wonder so many people practice it. I think of Louis CK who described very vividly the moment he explained to his daughter what lying is. It solved every problem but what did it do to Louis? Do we want to talk about the #metoo territory? Most of those women collectively lied for years about their experiences with a handful of horrible men. They say they were afraid of losing their jobs in the entertainment industry. So, in other words, for fame. Why then are they speaking out now after all these years of lying? One could easily assume again for fame. Is this real? So lying works—but for a short period. The aftermath of it is worse. Those women and the accused are probably traumatized after years of having to keep secrets about themselves and their colleagues. Both parties are lost in the long run, however in the end it depends on your goals. If your goal is fame, you should try to master lying. You know…post amazing pictures on Instagram everyday, become a fruitarian, buy from bio shops weird sorts of tea, respect only cool religions, never use Ableton again…but if your goal is to wake up and feel ok, then I’d say a Larry David type would be ideal. You may not have many friends, but the ones you have in the end will stick with you and you’ll also laugh a lot.

BDM: When buying food, what luxury item slowly became one of necessity?

SR: There is one thing that I am addicted to. It’s pomelos. Just thinking about it, it makes me dribble. I remember the first time my friend Sylvia bought it when we were shopping at the super market. “Is this a stuffed orange?” I inquired. “No”, she said. “Is this a sad grapefruit?” I went on. “No”, she insisted. “This is a pomelo”—and then I heard the harps and we took it home. I still have vivid in my mind my first time with a pomelo. Sylvia had to show me how to do it. It’s a ritual. Definitely not a quickie. You carefully tear the outside and then you have the bare body in your hand. You can touch it for a while, till you start to appreciate having fingertips. Then you can start tearing the flesh out. Slowly please, it’s even better. And carefully. So that you don’t hurt the veins. Cause you want to have it alive in your mouth when the time comes. Oh this moment. Like tender meat, but without the bad looks of the good-hearted. Or like a mum’s sweet pie, but without the guilt of your skinny conscience. Or like the lips of the one you could love, but you kiss, you never talk. Many times a pomelo kept me company after a hard day. One time I remember, I even ate two. (I think I was a bit sad). My tummy was complaining for half an hour but then it passed. That’s also one of the powers of a pomelo: it can never really hurt you.

BDM: Have you ever dreamed that you were playing the harp and you could feel it and see the strings vibrating, but no sound was coming out?

SR: No. But it happened in real life. I have played concerts when I was younger, when I didn’t really know how to make the instrument sound at its best. I guess it must have been like what you describe. The strings were vibrating, but they were making only a conventional sound. Oh when you start mastering those strings, it’s such a wonderful feeling…and this knowledge comes with age. So here a positive thought: aging can be great.

BDM: Well since I was born in 1981 and given the corruptive corporate climate, the obvious choice would be 2080. I would have never seen an octopus and while my memory files would show that they ruled the earth until the first great collapse, I would no longer need to fear them or even the idea of them. There will be better music in 2080 as well, none of this 2D “audio” bullshit. It will be intuitive and interactive, so I can tell my creators to fuck off not just to their faces but to their entire being. Teenage angst will be cellular, not what I had to deal with in the 90’s, driving around the suburban wasteland smoking weed and singing along to Ween.

SR: Do you prefer to do the right thing in music or the new thing?

BDM: This is something I used to struggle with quite a bit as a budding young jazz drummer. I was really taken by the innovative styles of Tony Williams and other virtuosic players, and I was always trying to show both what I can do and that “Hey man, I am different.” I literally thought Ringo Starr was not only a bad drummer, but even worse, “functional.” I mean music is not about function, right? I remember when I joined my first jazz combo, I showed up with a bag of paintbrushes, a hammer and a screwdriver and the other guys were rolling their eyes. They tried to fire me, rightfully, cause I was horrible—still listening and reacting but never letting the music just come out, the way Jehovah intended. I somehow thought it was my duty to fight for the new thing, the complicated, the perverse, the wounded puppy, but it’s so boring! And so fucking solipsistic! Now all I want is to feel the drummer and know it’s there, like the police state…

SR: Would you pick to listen forever to the best music ever written or better compose it?

BDM: Definitely listen and not compose. It’s so much easier for me to fall in love with someone else’s expression of self-pity than my own. Sometimes I get so bored with myself idly chasing escape, but I never get tired of Patsy Cline. The best composers and musicians tell your story as well as their own. If it was just me looking in the mirror for eternity, I would leave myself and then who would be the lonely one?