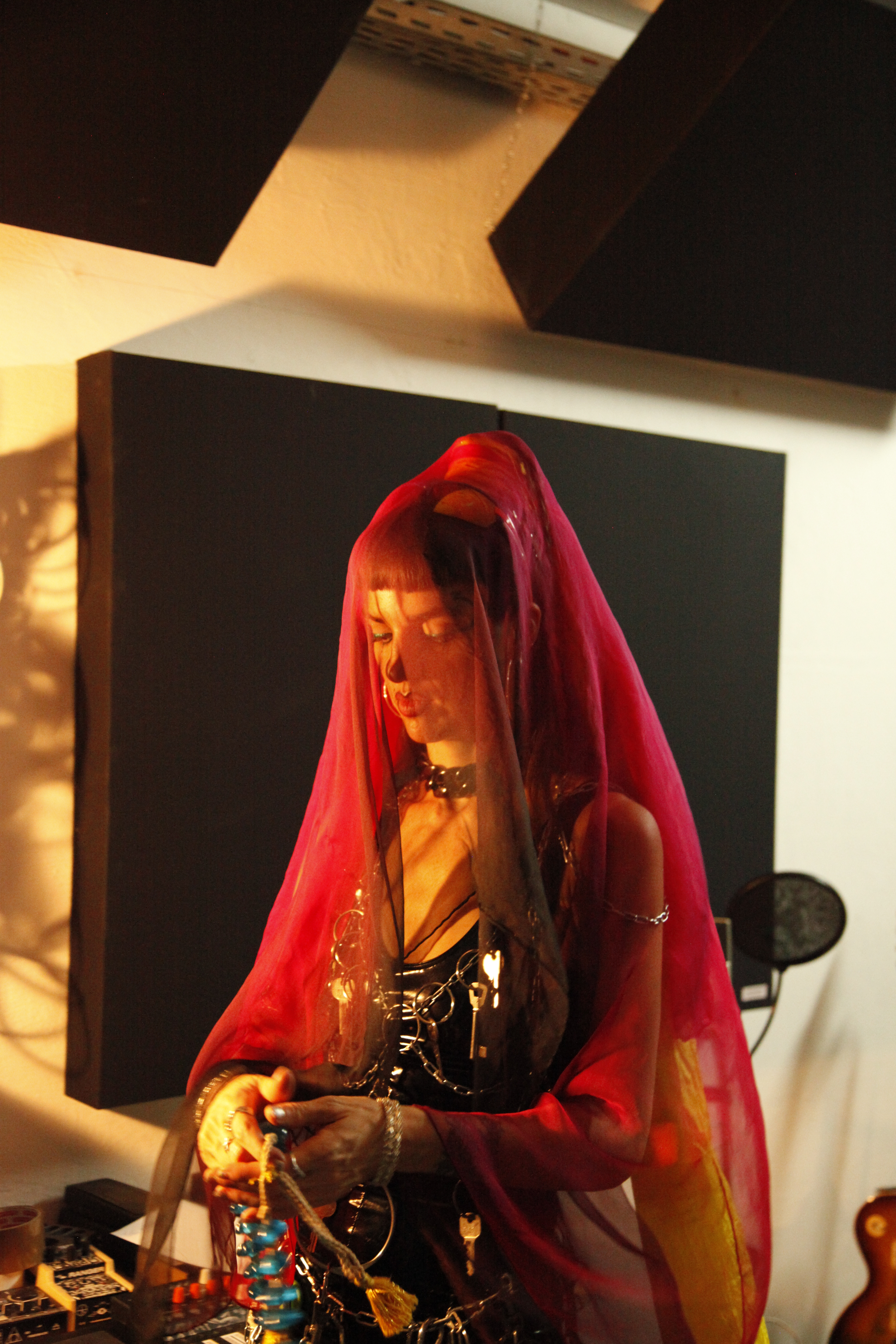 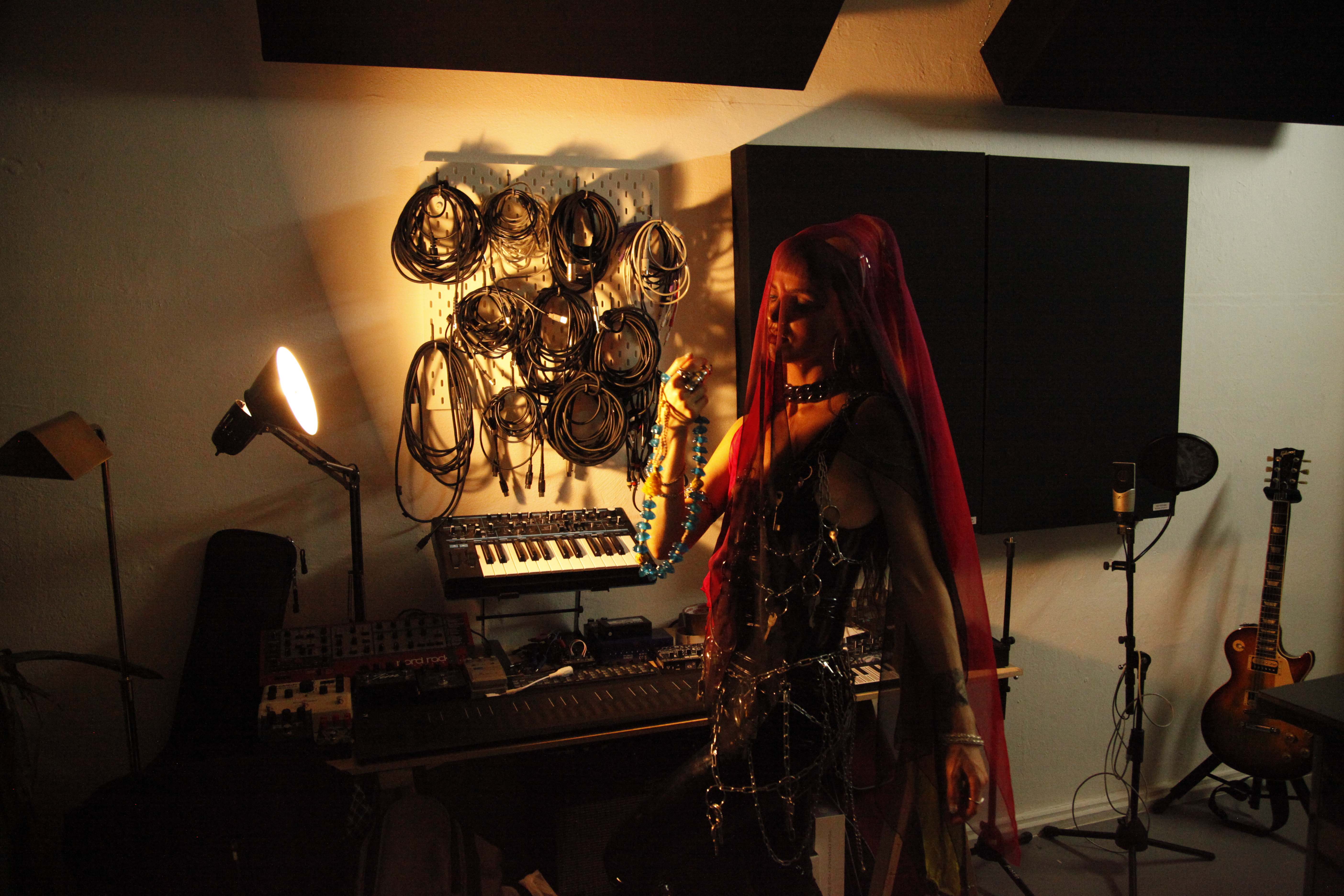 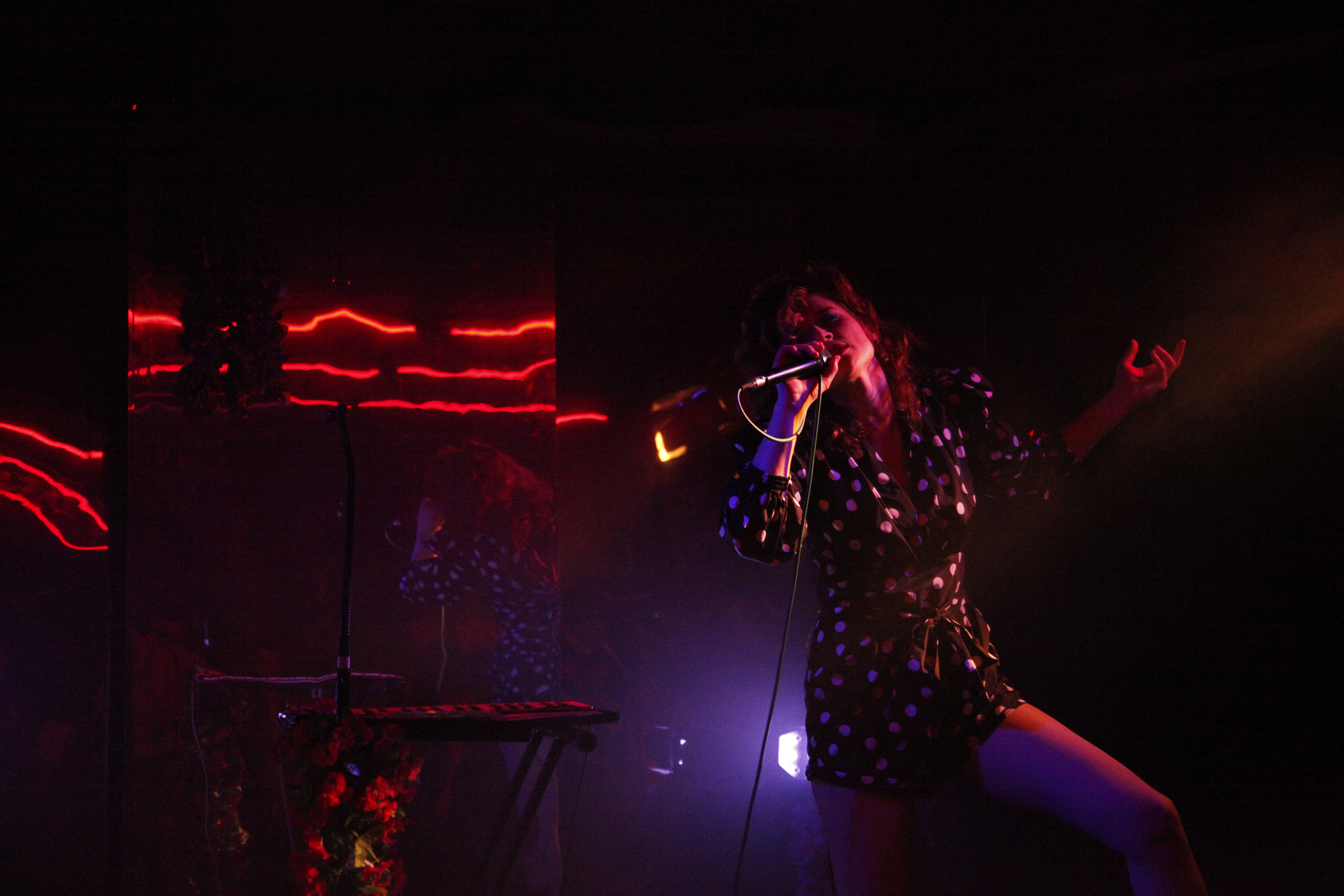 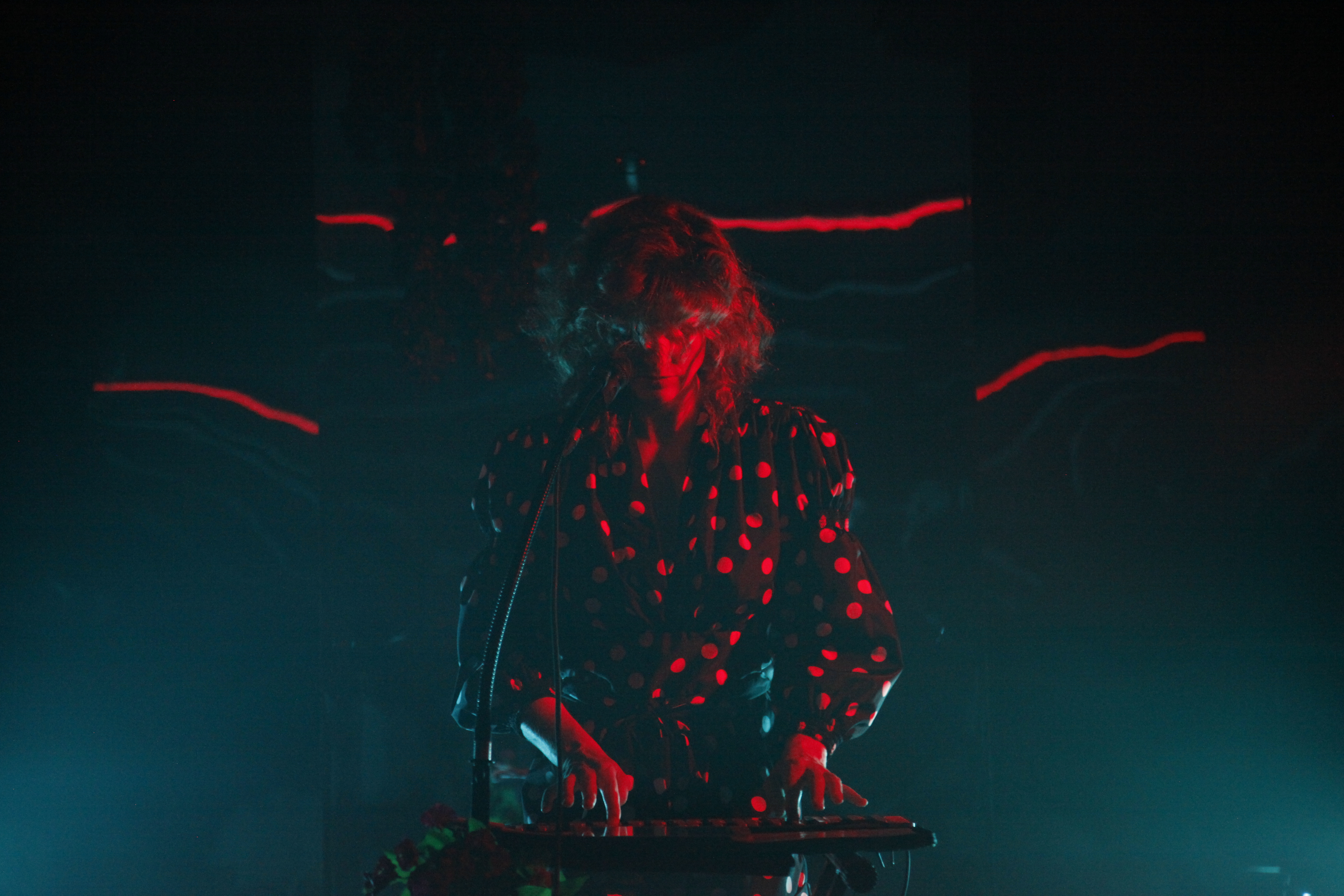 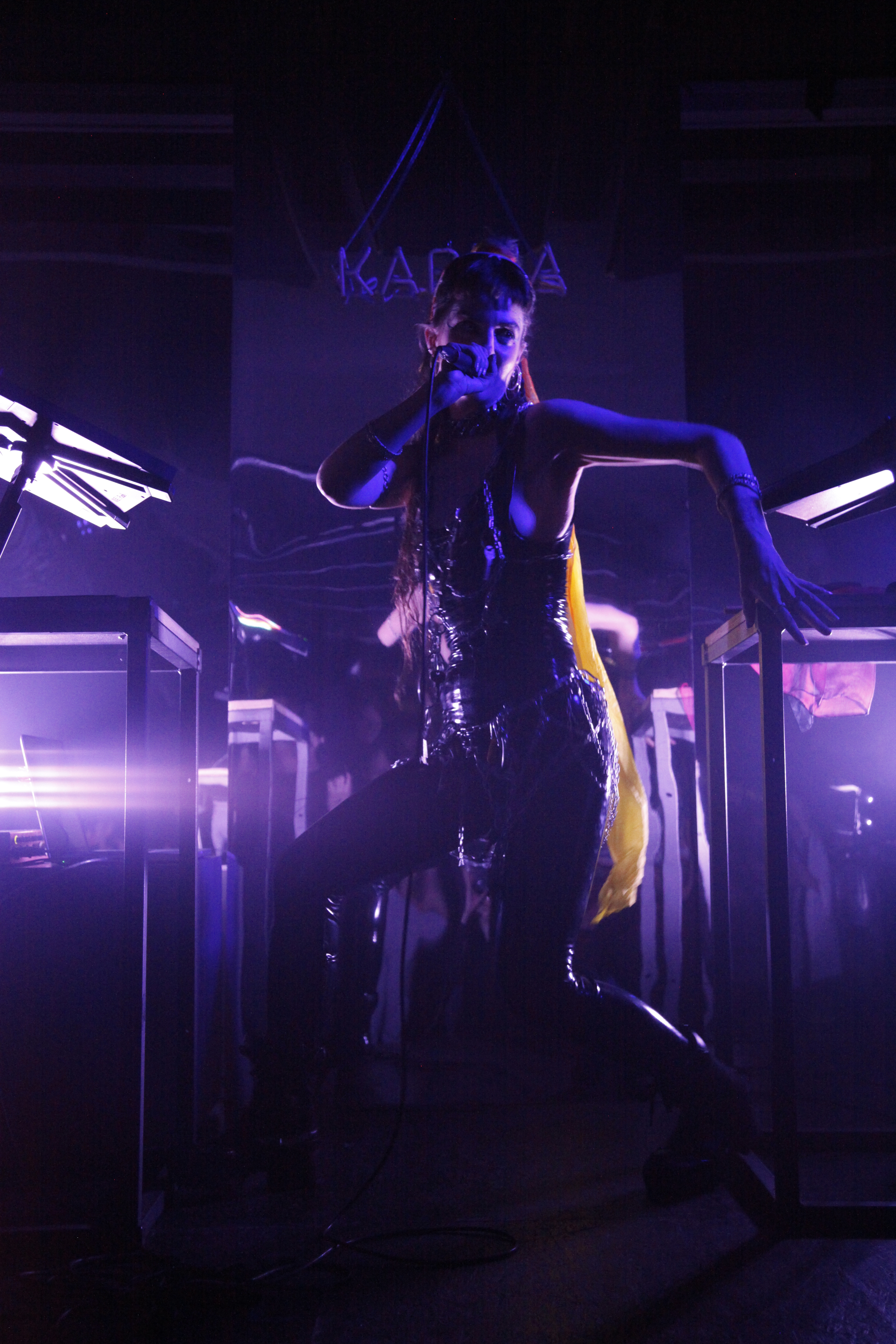 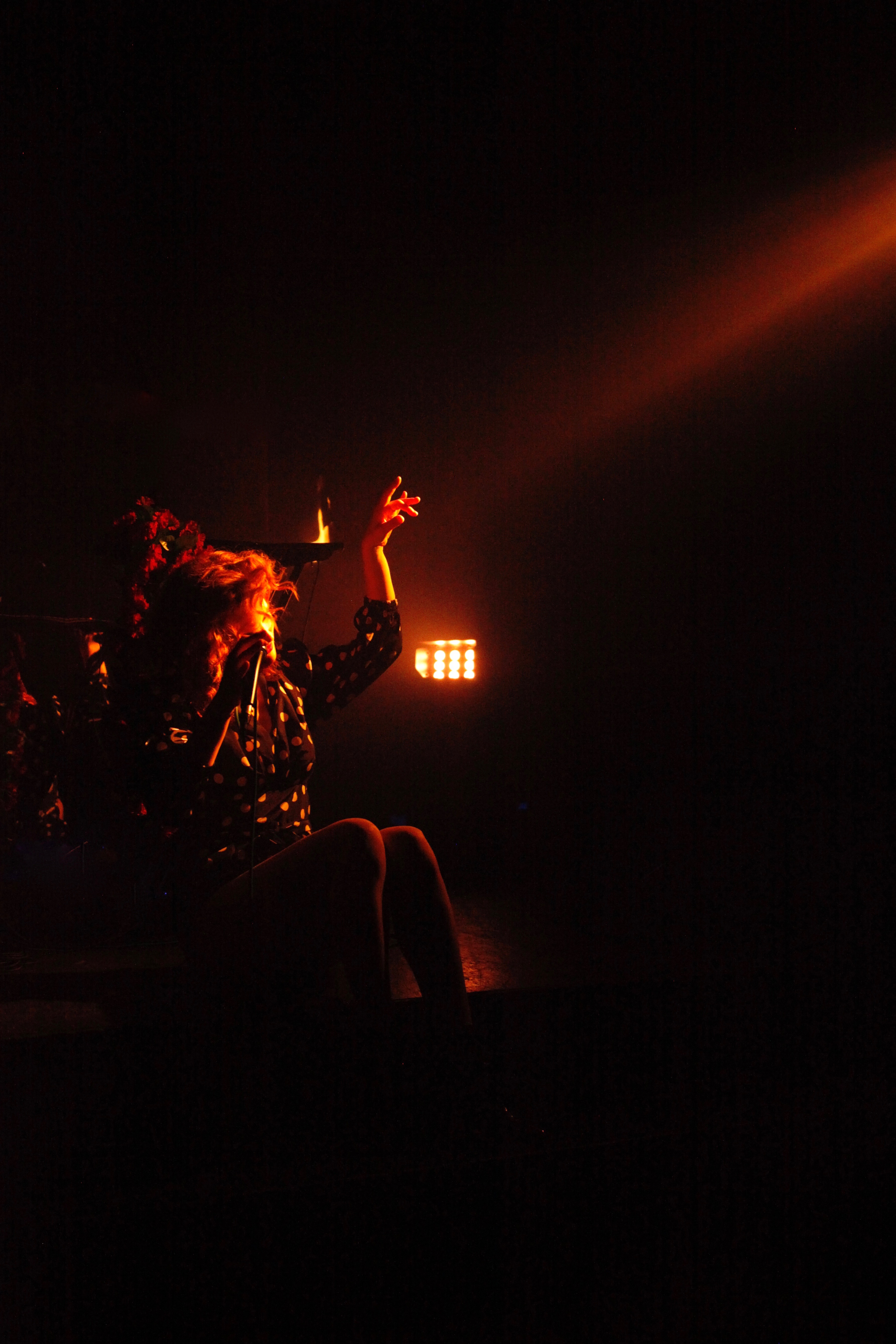 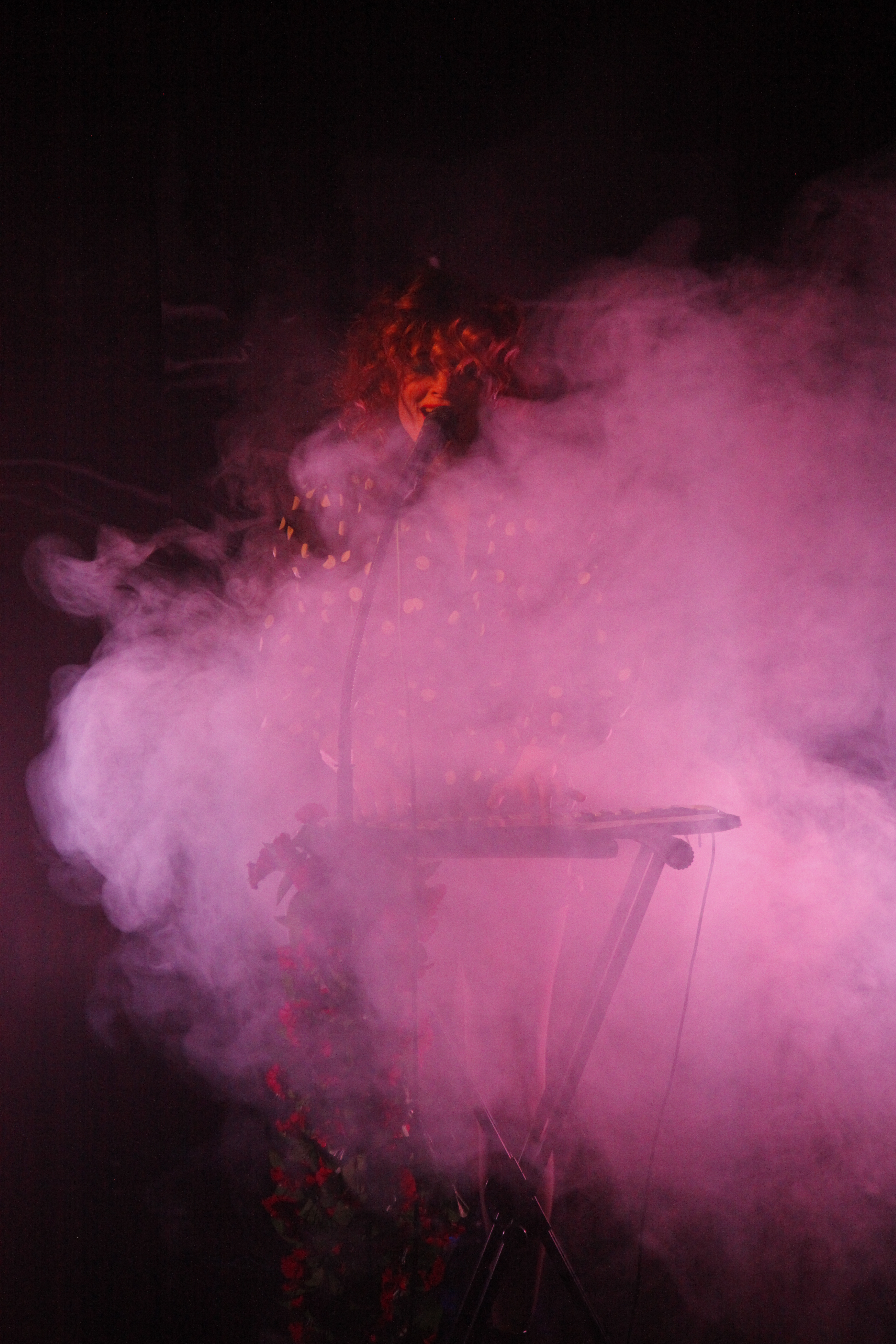 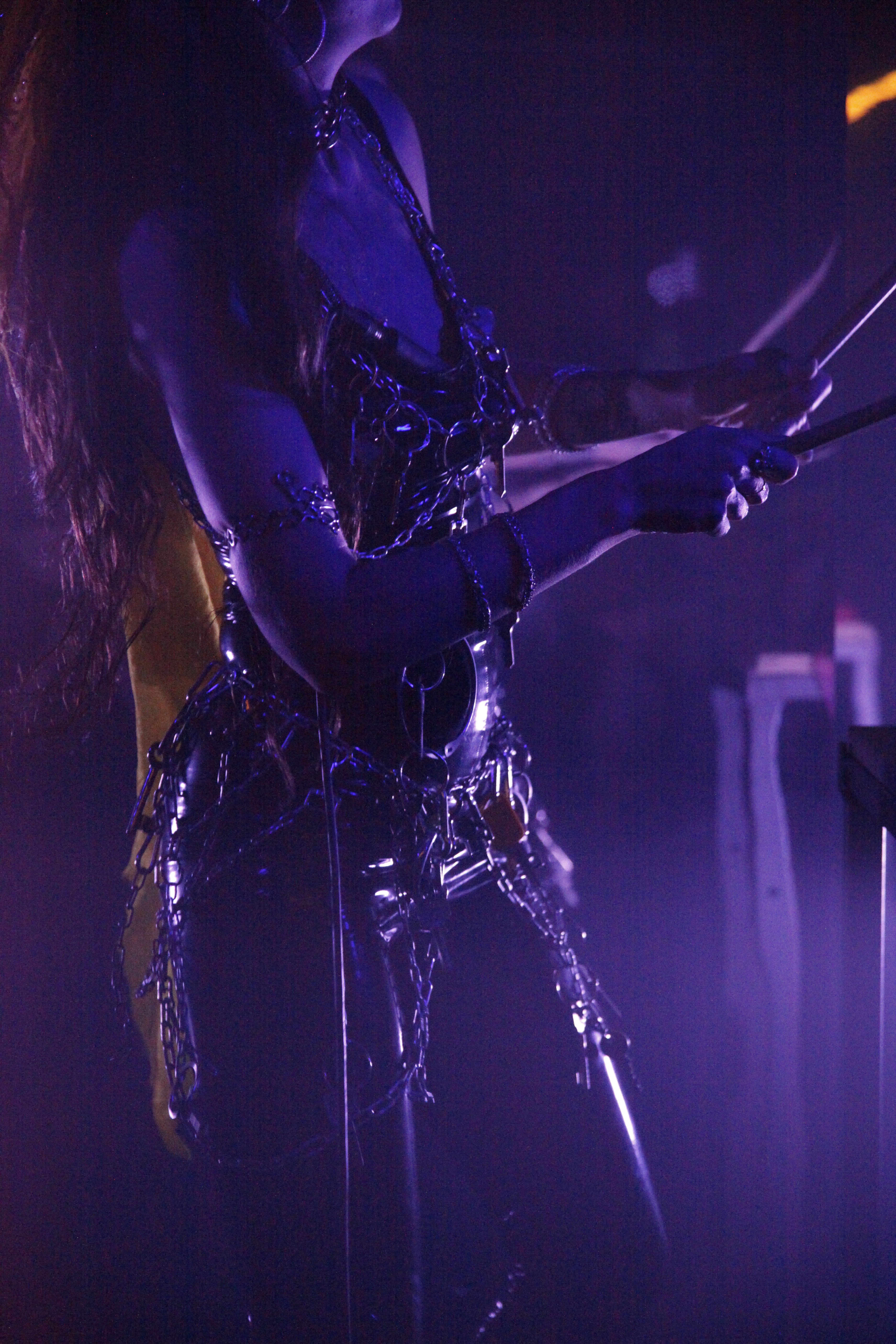 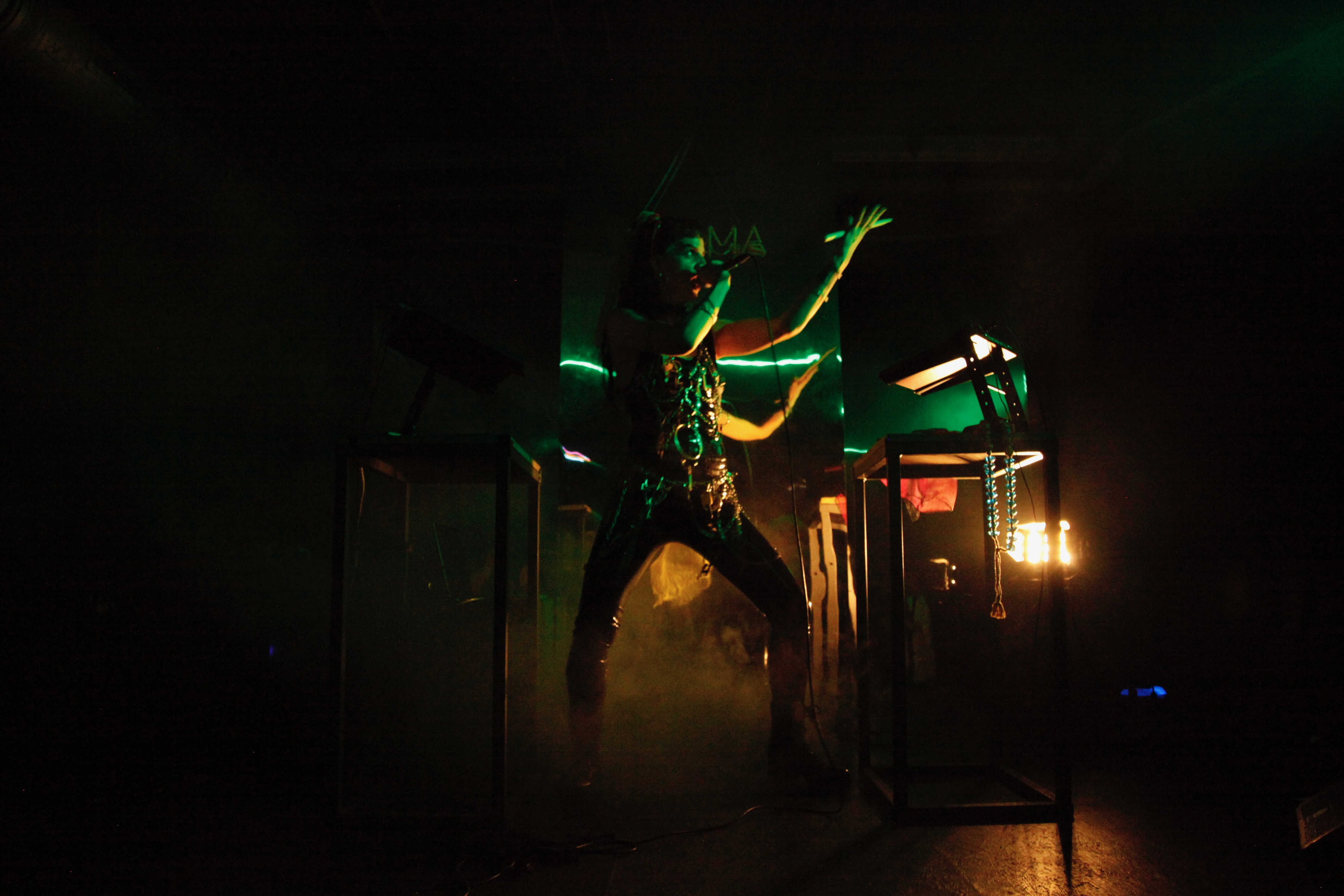 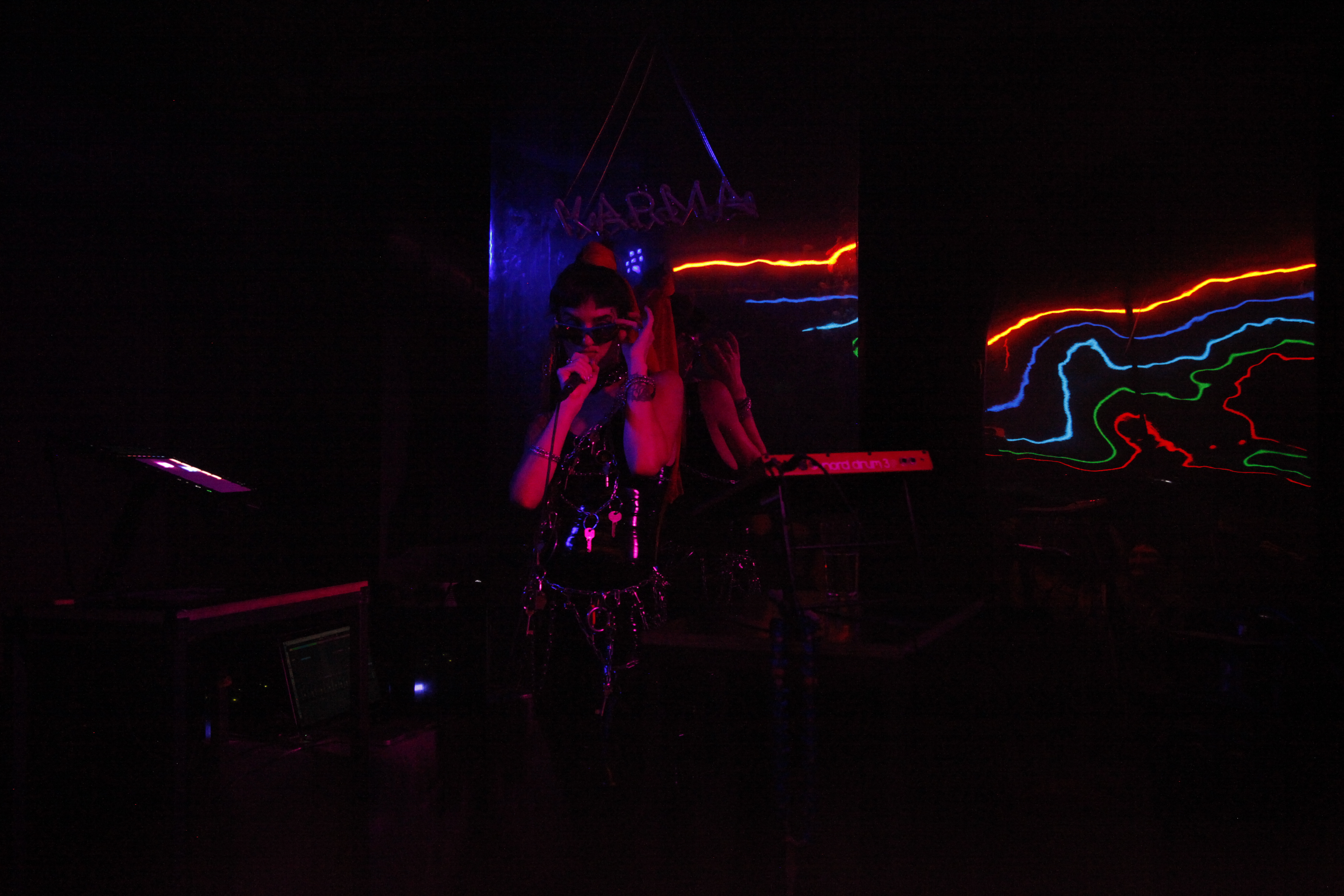 Our July residents of Amplify Berlin deserve special praise for keeping cool through adversity. As the scheduled mentor Planningtorock was not able to participate, mentees Alex St-Joan and Karma She started their journey without the expected structure, but dove deep in the studio and created amazing results nonetheless.

Various members of Berlin’s music community stepped in to help: Thanks to Max Boss from Easter who spent time in the studio with both of them; singer/songwriter Farao who guided Alex for her live set preparation; and Karma She got support on her live setup from Ableton Certified Trainer and educator Madeleine Bloom.

We had the two mentees interview each other to allow them to share more about themselves and their respective journeys.

ASJ: Coming from an art background, how did you get into music production?

KS: When I was a teenager I started making arty videos in which sound was very important and later I became a drummer and lead singer in a post-punk band. During my art studies I began creating performances with drumming and spoken word, but since I always listened to hip hop, I really wanted to make people dance. I did a short Ableton course and started my journey with electronic music. When I was traveling in India after I finished my MFA, I thought about creating a performance project with a character that is an alternative pop star/rapper. I wanted to create DIY pop shows (a sort of contradiction) and merge the distinction between life and art, so i created my ultimate art project – KARMA SHE – a creative identity that serves as a vessel for all of my multi-disciplinary explorations.

ASJ: You’ve been pretty hyped on social media about your new songs. What do you think is the one thing every song must have in order for it to work?

KS: I think i just get pretty hyped when I’m making new songs that I like and it translates on social media. It’s hard to say what’s the one thing because it’s usually a combination of different elements that have a tension between them. For example, a song with a great beat and an awesome sound can easily be destroyed by poor lyrics, in my opinion. When i’m in the studio a song has to make me wanna move when I hear it, if it doesn’t communicate to the brain in my hips it doesn’t work. I also always need to have a strange or disharmonious element in the track to create interest in my head.

ASJ: What is something you would tell an aspiring producer, especially one who is intimidated by the thought of technology they aren’t familiar with, in order to simplify the music-making process?

KS: To keep at it and know that it just takes practice to get through the technical stuff, especially in the beginning; plus every session I learn something new so it’s an endless process but filled with rewards along the way. Have a strong vision with what you wanna do, be honest and original and ask for help if you get stuck. Your music is where you are right now and that’s beautiful, so don’t block with too much self criticism and I recommend watching tutorials where experienced producers explain how they make tracks. It’s a great source for tips and seeing different workflows.

KS: What does success mean to you?

ASJ: On a micro level, I feel successful when I really nail a song. When I’ve put the time and effort in and arrived at the point where I believe I’ve constructed something that does the initial idea of the song justice, then I feel a huge, satisfying sense of achievement. On a broader scope, as a working musician, success for me lies in sustainability – in producing music that generates interest and thus paid work. These two things work comfortably hand in hand: the quality of the music is driven by my desire to produce a song that delivers according to my criteria, and the sustainability comes from the quality of the music and the interest it generates.

KS: From where do you draw your inspiration?

ASJ: It varies. My EP “Kick & Rise” was inspired in part by reading Franz Von Schönwerth, a civil servant in Bavaria in the 1800’s, who collected folklore from the area, much like the Brothers Grimm. The stories are random, crude and fantastical and made me think a lot about the stories we tell ourselves in order to understand our desires and fears. The idea for the EP began by retelling a particular folk tale from a different perspective in one of my songs. By the end of the production process, I had not only finished 4 songs but created some folklore of my own.More recently, as part of the Amplify residency, I have been taking my lead from samples of NASA space probe recordings and finding both rhythm and melody within them. Technology also plays its part in inspiration, sometimes it’s as simple as picking up a drum machine and just playing around with it, as I’ve been doing in the studio. I feel like our brains are always trying to shed information, all you have to do is find an outlet.

ASJ: Make coffee. Turn computer on. Start pushing notes around on the grid. Lay down a vocal line. Push more things around the grid. Get up and walk around. Return to the computer and listen to what is there. Finish coffee. Try out bass lines on the keyboard. Put filter delay on everything. Take filter delay off everything except for the rimshot. Make a note of some lines I like. Wonder if the word agreeance is an actual word. Spend 8 minutes online reading about the difference between agreement and agreeance. Decide neither word fits and discard line. Remind myself that I need to drink water. Fill up large water bottle and then ignore it for the next two hours. Try to find a decent snare sound. Spend 12 minutes EQing it to then decide that a closed high hat would be better. Notice the stiffness in my shoulders and remind myself to do some exercise. Make a herbal tea instead.