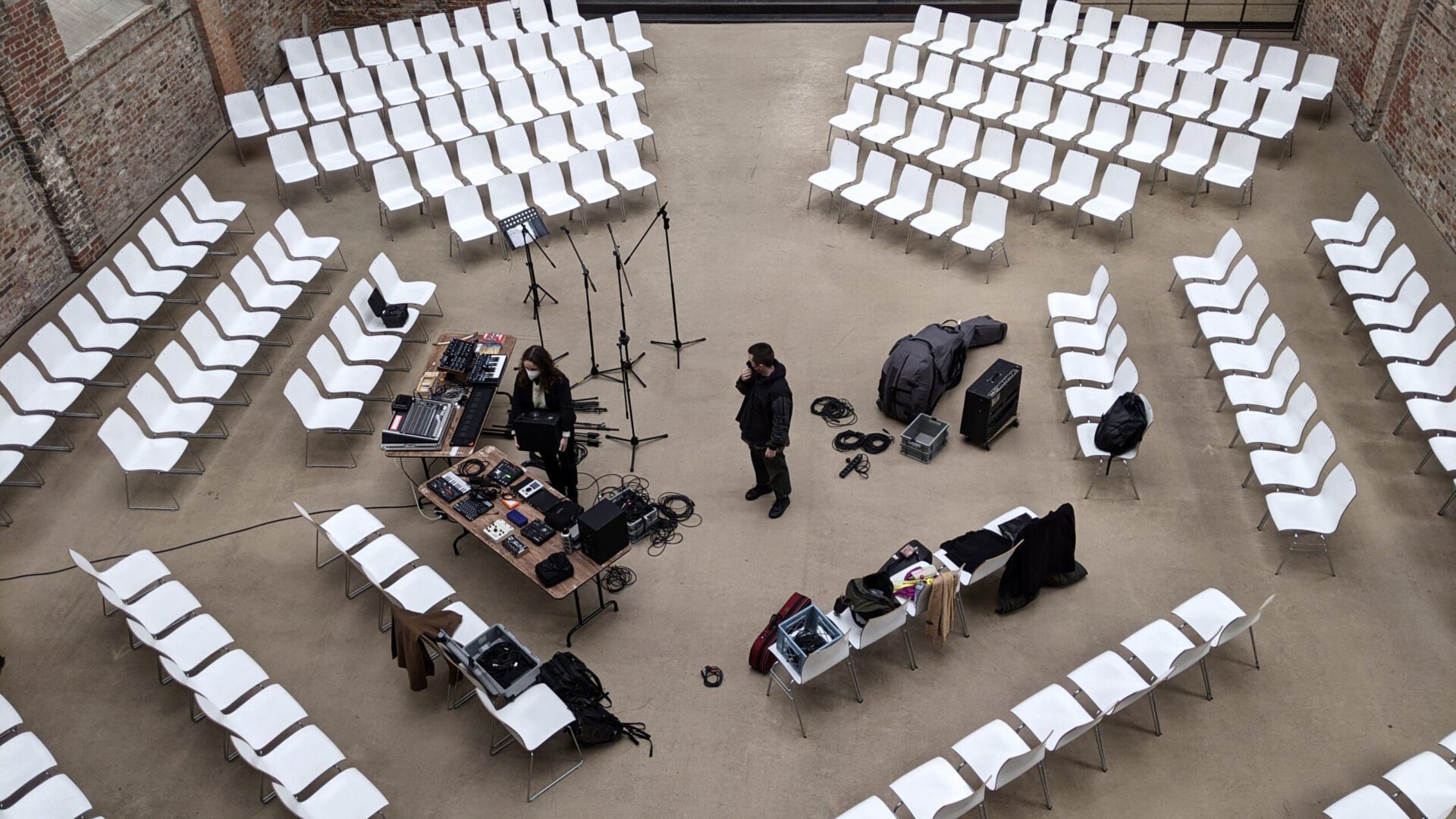 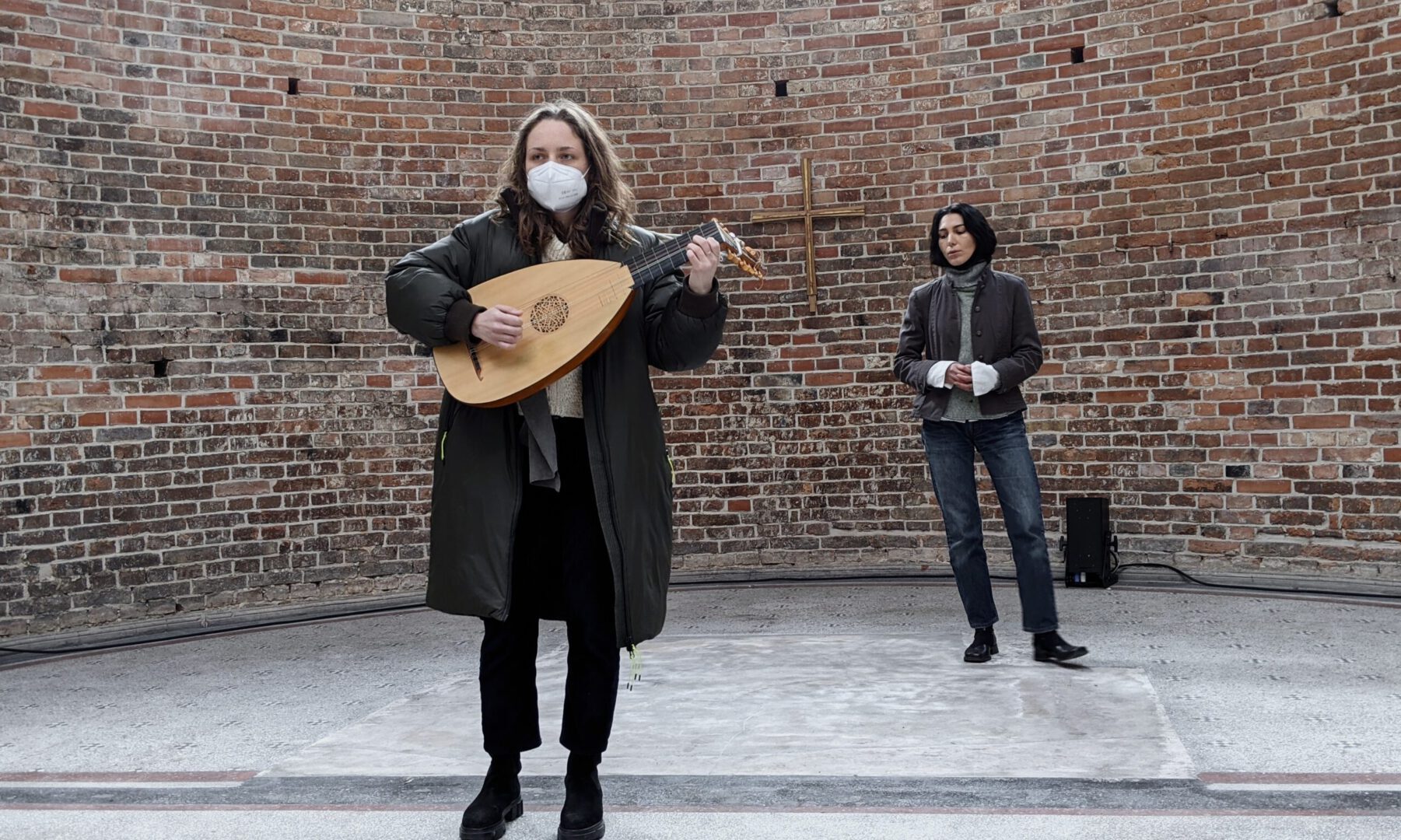 Hildegarda (aka Agnese Menguzzato) is an Italian composer & musician based in Berlin. She is our second mentee of the month! Classically trained, she then started experimenting with electroacoustic compositions and electronics, seen as a timeless vehicle to reach a wider spectrum of aural possibilities. She often employs the auditory potential of her lute to create uncanny paths in the harmonic and tonal sequences of her work. Her constant sonic research reflects also her early fascination for polyphonic choir music from Renaissance and the Middle Ages.

Hildegarda’s musical expression is deeply rooted in her childhood imagery and in the confront with nature, from which every human sentiment flows; having lived between Trentino Alps and Emilia Apennines, she’s driven to create sonic landscapes, in which she gathers and combines raw and digital sounds. Her music laps various fields of application in media. She’s currently involved in a project on the sound perception in Japanese culture through Shinto rituals.

Soho Rezanejad (b. 1989, New York City) is a Danish Iranian artist and composer. Since 2015, she has recorded over ten albums reaching wide acclaim for her versatile vocal performance and prolific practices in electronic music. Her work encompasses performative alter-egos and cross-disciplinary collaborations that are released through her record label Silicone Records.

Hildegarda: Which instruments would you associate to the different periods of your life?

Soho Rezanejad: It depends on whether I was looking at the time with old or new eyes. If I was looking back with the eyes I have now, life would start with something that’s in most cases not recognized as an instrument, like a blowdryer. Then I’d choose a lute for my refined years and maybe go back to the blowdryer at some point before everything would become soundless again.

SR: What are three essential ingredients you must have in your kitchen?

H: Oh, that’s a funny tricky question. I’d say flour, salt and water (the basic trio for bread, yeast, life) together with good tomatoes, garlic and a great olive oil. It should do for a decent marinara pizza or a nice dish of pasta. You know, us Italians. Ah and last but not least, time.

H: Speaking of ingredients, which of them would you choose to cook together in a dish to represent your current expression through music? And in which guise?

SR: I wouldn’t turn on the stove. It would be like arranging a table full of edible flowers and inviting two friends over. One would be critical and stoic, and the other one ridiculous and unpredictable. Then I’d sit in between them, tortured and entertained by the mismatched ceremony.

H: Music is a potent time-machine for emotional memory. Do you also associate it with visions, smells, physical sensations or taste?

H: Assuming there’s a distinction between our sensory perception and ideas, I think so, mostly with colors and visions. I guess it’s more common than we think.

SR: With visions, I do. But scents and tastes rarely happened to me that way. It usually happens the other way around: I will sense something, then write the memory into a piece of music. It’s a more masculine way of experiencing it, rather than being received By it.

SR: When’s your preferred time of the day?

H: I find it to be the most lively part of the day. Before the sun rises, even though it’s night-time and most of the people in your area are sleeping, the awake world echoes in the distance, as a subconscious, but you’re alert. It gives breathe to my thoughts and feelings, and conveys them to be looked at in a quieter way. And then you gently wake up with the light, seeing people starting another day. I find it a potent sensation. So to me it’s a great time to make also music.

SR: There’s that story about a woman who trades her compassion with a wizard’s genius….
Would you trade yours if everything you’d ever make would become a masterpiece?

H: It’s difficult to answer that, because to me without compassion you can’t really have masterpieces in some ways. To me it is what makes us humans; we interact, wanting to create and share something that can outlive us to some extent, because we die. I also think that generating one masterpiece after another is in a way distant from the natural rhythm of our lives. So it wouldn’t feel genuine to me. That woman must have traded it for a good reason, but maybe for another purpose.