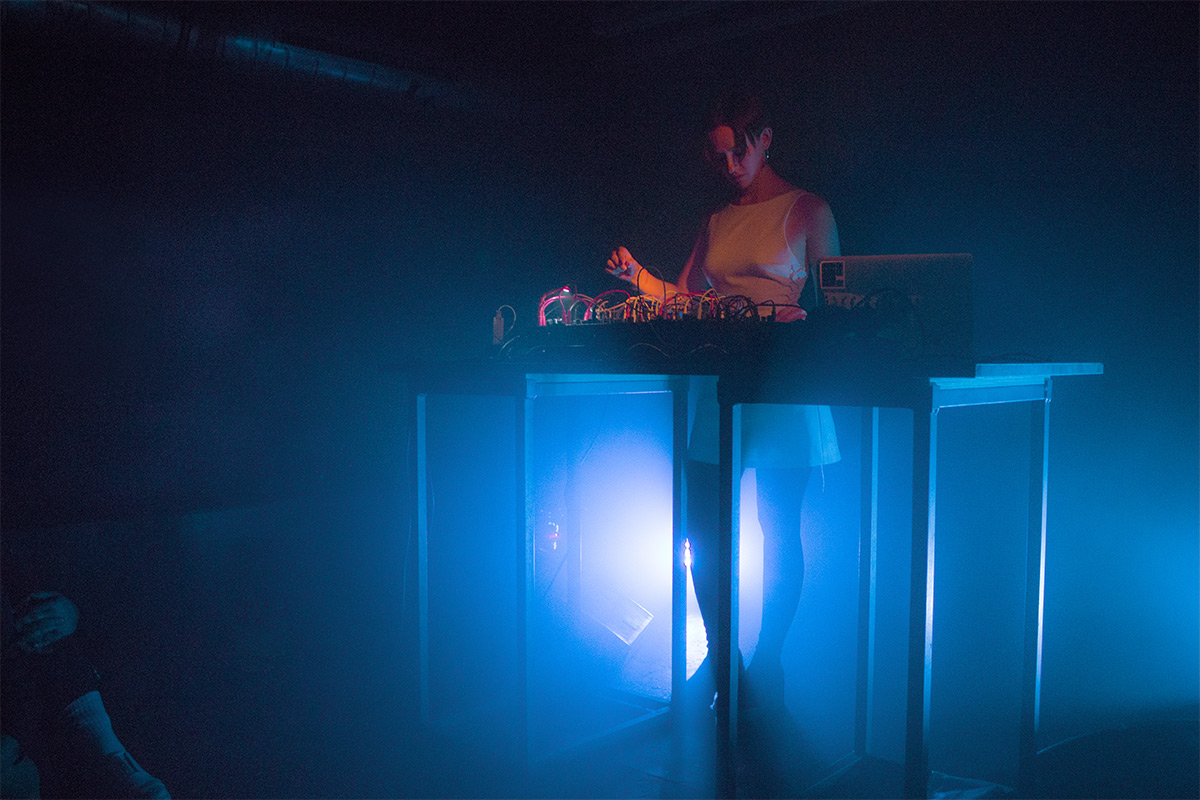 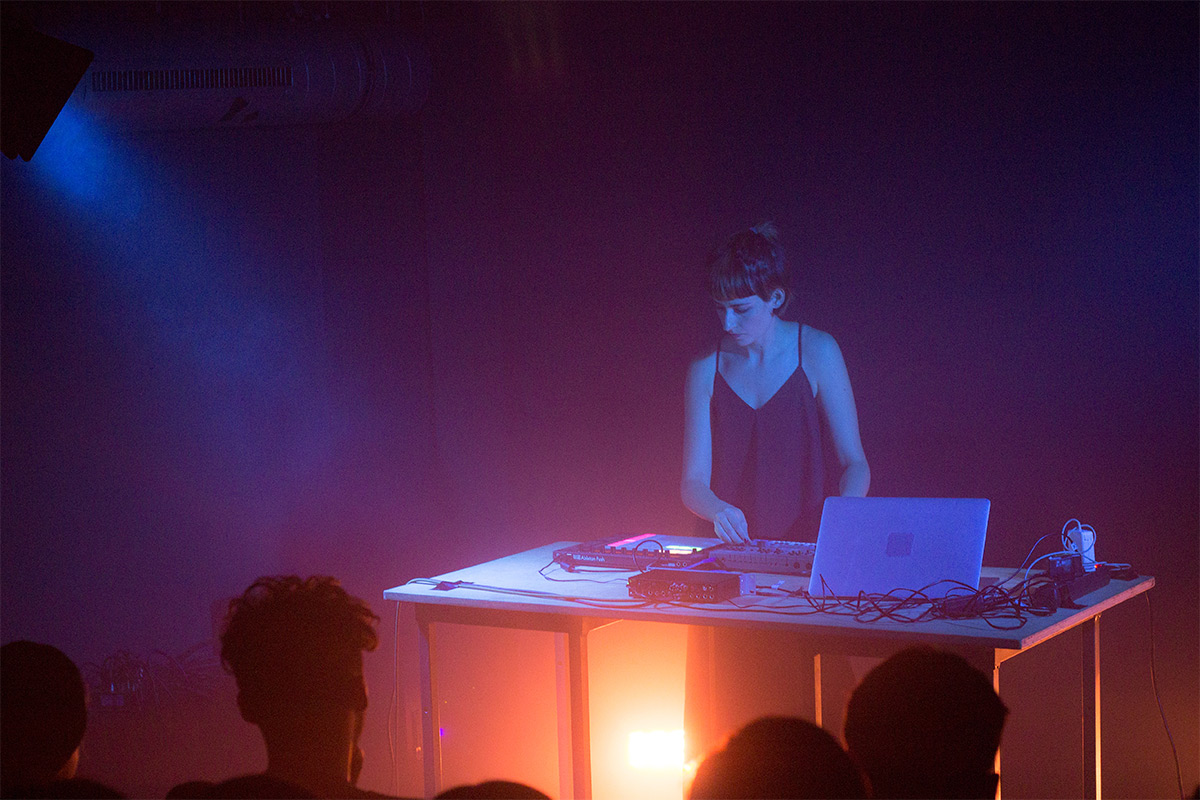 Abigail Toll and Maya Shenfeld are the first two mentees of Amplify Berlin, our new creative development program for emerging artists. Together with their mentor Caterina Barbieri they developed their live set which they will present this Thursday on the occasion of the first Amplify showcase in the Club. We proudly present you one track Abigail has worked on this month and a short Q&A with her about her time at ACUD.

I applied for Amplify because I was looking for a residency that specifically supported new and emerging artists, so the timing of the programme was perfect. Considering how amazing the mentors are, my expectations were already high. I was kind of shocked that Caterina – an artist who is known predominantly for playing modular synth – selected Ionian Death Robes which is a combination of raw drones and somewhat discordant violin and flute. Though it later made sense when learning of her formal training as a classical guitarist. The residency has far exceeded my expectations and has been an amazing experience. I would recommend it to any emerging musician who is struggling to define a certain aspect of their practice or project and is in need of guidance.

I’ve learned something new in every one of Caterina’s sessions and am always so impressed by how focussed and productive they are. She taught me how to use Ableton for mixing tracks and also helped me to develop a live set that can accommodate different formats. This is super important since my collaborator Laury Achten lives in Utrecht, so the distance means that we aren’t always able to play together. One of the many highlights was working with Caterina to develop a modular synth drone for one of our tracks called ‚Hallows‘ that also features in the live set. It was exactly the heavy, cavernous noise that the song needed to reach a level of intensity and was exciting to see the mechanisms behind the synth.

How was working with a mentor?

Working with a mentor was invaluable. I’ve never studied music or had any proper training in composition, so feel very fortunate to have learned some vital production skills and advice from someone that I hugely respect. Caterina, Shub and Phillip were always incredibly accommodating and supportive and ensured that I was fully equipped for whichever aspect it was that I was working on each week. I now feel that I have the knowledge and structure that Ionian Death Robes needs to perform live and expand into more of an electronic sound.

A combination of gloomy, noisy drones and despairing flute 😀 There are some lighter moments of relief too, during more sparse flute solos. It’s a shame that Laury won’t be able to play live violin for the first show, however we’ve managed to weave some of her passages into the set… so she’s there in spirit.

I’m hoping to line up more live shows, both as duo and solo performances. We’ve also been working on an EP titled „old world new ruins“ and are aiming to release that at the end of the year.

Maya Shenfeld and Abigail Toll are the first two mentees of Amplify Berlin, our new creative development program for emerging artists. Together with their mentor Caterina Barbieri they developed their live set which they will present this Thursday on the occasion of the first Amplify showcase in the Club. We are presenting you one track Maya has worked on this month and a short Q&A with her about her time at ACUD.

Maya, thanks much for your time! Tell us, what were your expectations when you applied for Amplify?

I was looking forward to working in a professional sound studio, share and exchange thoughts and experiences with a mentor, as well as meet a community of fellow musicians working in the city. I liked the idea of changing my every day, while still being in Berlin, focusing on finalizing a project.

Amplify put together a highly professional studio, working in the space, I had a chance to explore loads of new sounds, synths, experiment with a four-track tape recorder, as well as finish a couple of mixes.

There were so many – working long nights at the studio, talking about music with Caterina Barbieri & Shub Roy. Recording feedback with Philipp Hülsenbeck on a Tuesday morning (sorry ACUD cohabitants!). And of course, joining Caterina and Carlo on air at Cashmere Radio on their monthly show Fulman (while sipping the best Italian cocktails in town).

And how was it to work with a mentor? Is there something in particular that you have learned during the residency?

At times composition and production can feel somewhat solitary, you’re very much in your own head. Working solo, things happen like forgetting your initial intention while developing a project, giving up on an idea because there’s no time to make it happen, or getting mixed up between different versions of the same track.

Sharing my work with Caterina, as well as getting to know more about her creative process, has been truly inspiring. We share similar backgrounds, we both started our way as classical guitarists then expanding our practice to composition, electronic music, and production. So I feel very much at home talking about music with her. Apart from learning a variety of mixing and production tricks, I had lots of support and constructive feedback while finalizing my set for Thursday. Things really came together.

Slow and evolving velvet harmonies, a swiveling spectrum of frequencies, synths, brass, feedback and most importantly, an experience of deep deep listening.